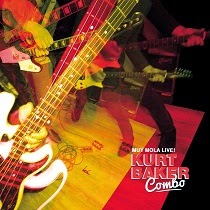 Portland singer-guitarist Kurt Baker is a household name on the power pop scene, from his days with The Leftovers, as a solo artist, and with his side project The New Trocaderos. The recently released Muy Mola Live! (available from Kool Kat Musik) was recorded on a Monday night at Salty Peet’s Rock Shack in Kenosha, Wisconsin and offers an energetic mix of originals and well-chosen cover versions. Although other reviewers have beat me to the punch on this, there’s just no way to avoid describing Muy Mola Live! a party.

Actually, “Partied Out” is one of a dozen high-speed songs served up by The Kurt Baker Combo on this release. With its revved-up guitars and infectious melody, it qualifies as textbook power pop, as does the celebratory concert opener “Weekend Girls.” The frenetic “Aorta Baby” borders on punk, while “Everybody Knows” and “Don’t Look Back” have more of a 1960s Top 40 vibe. The Kurt Baker Combo dips back into that decade for faithful, if a little more guitar-driven, covers of The Searchers’ “Love Potion #9” and The Beatles’ “Cry For A Carajillo.” Baker engages the crowd throughout the performance with comments like, “You know, we’re having a blast!” and “Everybody knows how to have fun!” Judging from Muy Mola Live!, the crowd in Kenosha was definitely having fun that night.
Posted by Terry Flamm at 10:06 PM