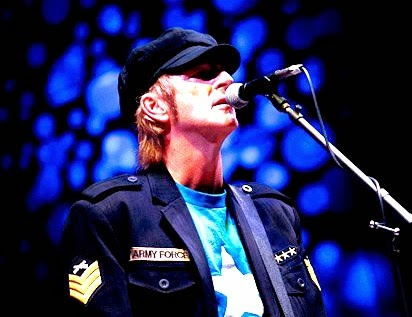 International Pop Overthrow wraps up another 10-day visit to Chicago this Saturday evening, but don’t worry because the grand finale is in good hands. Five of the six bands on the final showcase are IPO - Chicago veterans, and the other act—Sam Vicari—is an impressive newcomer. As always, it’s best to check the official IPO website for a thumbnail description of each of the acts involved. All bands are from the Chicago area unless otherwise noted.

8:00 PM Collectors Vocalist-rhythm guitarist Michael Mazza heads a quartet that mixes indie rock and power pop, as it returns to IPO - Chicago for its seventh year. The band’s main influences include Badfinger, R.E.M., Cheap Trick, and The Buzzcocks. They’ll be showcasing songs from their latest album Travelogue.

8:45 PM Your Gracious Host  Grand Blanc, Michigan-based singer-guitarist-drummer Tom Curless has released five albums under the Your Gracious Host moniker after first hitting the Chicago music scene with the band Autoliner. He’ll be joined by fellow musician/friend Tom Leach for this IPO performance. The Writers Of Our Destiny, a new song cycle from Curless that’s based on a short story, is set to be released in the near future.

10:15 PM Sam Vicari  The indie rock/power pop singer-guitarist’s live performances around town have been netting positive reviews. His third album Giving Up, with catchy songs like “Little Stone” and “All And Everyday,” is now available from Sip City Records.

11:00 PM Lannie Flowers Band There was a wealth of talent once again at this year’s IPO - Chicago, but this gentleman from Texas and his band have to be viewed as the festival’s big gun. They make a number of stops on the IPO circuit, bringing joy to power pop purists along the way. Vocalist-guitarist Lannie Flowers creates catchy songs that are reminiscent of The dB’s and Elvis Costello, as well as the mid-1960s Top 40. His Live In NYC album gives a clear indication of the energy Lannie Flowers brings to every performance.

11:45 PM The Romeros After performing a solo gig this past Tuesday, singer-guitarist Mike Vanderbilt returns to the Red Line Tap with his band The Romeros as the final act of IPO - Chicago for the second year in a row. These guys describe the original music on their CDs as “Garage/Power Pop/Pop Punk/ Rock and Roll,” and justify that description with songs like “Bottle Rocket.”
Posted by Terry Flamm at 9:16 PM