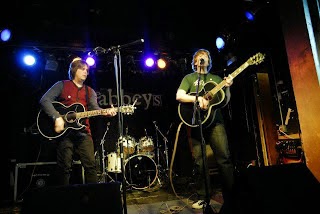 You can almost hear those harmonies from The Abbeys coming through the photo.

There will be a wide range of ages represented on the stage at Red Line Tap tomorrow afternoon as International Pop Overthrow Founder/CEO David Bash continues his tradition of inviting fledgling bands to perform as part of his weekend afternoon showcases. In addition to the teen bands scheduled, there are four longtime IPO favorites on board.

2:00 Euphoria A coed teen band with six members whose taste in music ranges from Led Zeppelin to Weezer.

2:45 Jeremy Band This single-named, Portage, Michigan-based singer-guitarist comes close to rivaling Dave Rave’s amazing IPO attendance record, having played the festival in several cities over the years. Jeremy draws inspiration from the 1960s and has released several CDs on his own Jam label. He can always be counted on for some powerful and extensive jamming during his live performances.

3:30 Clear Confusion This young quartet first came together at the Rock Academy of Dupage and is active on the local Battle of the Bands scene. Its set list tends toward current alt rock, with covers of The Foo Fighters’ “These Days” and The Black Keys’ “Gold On The Ceiling.”

4:15 The Cubes This quartet puts an emphasis on guitar-driven arrangements while taking the occasional journey into psychedelic or spaghetti western music. They like to think of their approach as a little twisted.

5:00 The Abbeys The lineup has changed over the years, but this power pop band’s nucleus of singers-guitarists Mike Cohen and Jeff Janulis has performed at every single International Pop Overthrow since the festival has been coming to Chicago. Cohen and Janulis have spent years creating Everly Brothers type harmonies within infectious arrangements, so it’s no surprise they also have a band called The Everly Hillbillies.