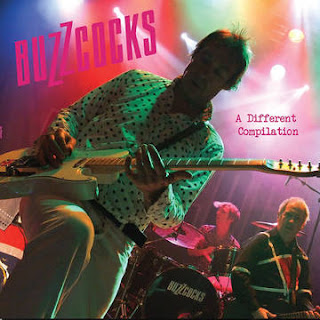 A Different Compilation by The Buzzcocks will be part of this year’s RSD treasures.

Vinyl fanatics will have to wait another year before Record Store Day is fully back to normal. The strategy of holding smaller RSD Drops instead of the traditional big event on the third Saturday in April was a sensible response to the pandemic in 2020. It still allowed us to purchase limited-edition records but in a far less crowded atmosphere. So, it’s no surprise the RSD Drops are back for 2021 as we tiptoe toward normalcy. There are two scheduled for this year so far; June 12 and July 17. Both lists are shown together on the official Record Store Day site, so be sure to check the date on any records you’re planning on buying on June 12.

The Old Town Art Fair, one of Chicago’s best known art events, is taking place June 12 and 13, so that could make for a busy weekend if you’re like me and enjoy art as well as vinyl. Usually, the Printer’s Row Lit Fest happens right about that same time, but this year it’s been pushed to the weekend of September 11 and 12.

Henry Diltz, the photographer who created iconic portraits of bands from the mid to late 1960s, posted on Facebook and Instagram that Crosby, Stills, Nash and Young are signing limited-edition prints related to his work for their Deja Vu album. The CSNY Official Store doesn’t mention anything about this, but hopefully we’ll found out soon if and when these prints are going on sale. The 50th Anniversary Box Set for Deja Vu is due out May 28.

The family of the late Richard Wright is putting together a website featuring stories, film, and photos about the Pink Floyd co-founder and keyboards player.

The May issue of the Illinois Entertainer, with a cover story on the recently back-in-auction Del Amitri, is available on the publication’s website. In addition to Tom Lanham’s feature story on Del Amitri, the issue has Jeff Elbel’s positive reviews of The Who Sell Out Super Deluxe box set (a must for dedicated fans of The Who); Liquid Soul’s Lost Soul Volume 1 (praised here on an earlier post); Pink Floyd’s Live At Knebworth 1990;  and former lead singer for The Tubes Fee Waybill’s Rides Again. Elbel also gives an 8 out of 10 rating to the recent re-release of God Bless The Go-Go’s, which is considerably more generous than the review I.E. gave the album when it first came out in 2001. (It wasn’t by me, although I was a staff writer at the time. I would have given it an 8 as well.)

Albums coming out this month (using the May I.E. as a cheat sheet) include You And Me by Nancy Wilson from Heart, When God Was Great by The Mighty Mighty BossTones, and Van Weezer by Weezer on 5/7; Blood by Juliana Hatfield, Fat Pop Vol. 1 by Paul Weller, Daddy’s Home by St. Vincent, Delta Kream by The Black Keys, and Scatterbrain by The Chills on 5/14; Intruder by Gary Numan, Micky Dolenz Sings Nesmith by Micky Dolenz, and American Quilt by Paula Cole on 5/21; and makeover by k.d. lang and Reprise by Moby on 5/28.

Musician/artist Ronnie Wood recently announced that he is now an ambassador for the Turn Up For Recovery organization, which helps addicts recover through the power of music.

While reading an article about the resurgence of ska music on the Stereogum website, I was intrigued by the name Catbite and checked out the Philadelphia-based band’s Bandcamp page. A quick spin through the eight catchy tracks of their 2019 self-titled debut was enough to make me buy it. “Midnight Eyes” and “Scratch Me Up” were particularly good.

A savvy veteran has been added to the already impressive team of musicians and sports figures Theo Epstein and Peter Gammons have assembled this year’s Hot Stove Cool Music fundraiser virtual event. Eddie Vedder from Pearl Jam will join Yo-Yo Ma, Boston Celtics majority owner Wyc Grousbeck, Juliana Hatfiled, Bernie Williams, Kay Hanley and other surprise guests on May 18. Admission charges range from a $10 Single Ticket to the $1,000 Grand Slam, depending on how much you’re willing to donate. 100% of the proceeds go to The Foundation To Be Named Later, the charity organization founded by Theo Eptein and his brother Paul and The Peter Gammons College Scholarships.

Tickets are now on sale for The Art Of Banksy, coming to Chicago on July 1. The exhibition is described by its production company Starvox Exhibits as the world’s largest collection of privately owned work by the mysterious English street artist. 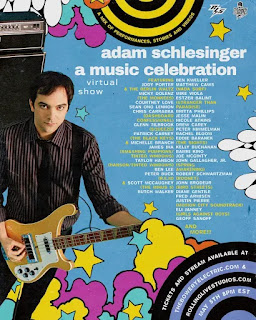 There’s a virtual tribute to the late Adam Schlesinger coming up next Wednesday, May 5 at 8:00 pm EST on the Rolling Live Studios site. Schlesinger, a founding member of the bands Fountains Of Wayne and Ivy, as well as a prolific composer for movie soundtracks, passed away last year due to complications from COVID-19. Featured guests include Peter Buck from R.E.M. and Scott McCaughy from The Minus Five; Fred Armisen; Micky Dolenz from The Monkees; Sean Ono Lennon; Glenn Tilbrook from Squeeze; Courtney Love from Hole; Drew Carey; Chris Carrabba from Dashboard Confessional; Britta Phillips; Peter Himmelman; Patrick Carney from Black Keys and Michelle Branch; James Iha from Smashing Pumpkins; Ben Lee; and Taylor Hanson from Hanson and Tinted Windows. Tickets are $20. Proceeds for the event, which is being organized by Jody Porter from Fountains Of Wayne, will go to MusiCares and the New York venue The Bowery Electric.

As mentioned in an earlier post here, several recording artists have joined forces on a tribute album for Adam Schlesinger titled Saving For A Custom Van. The 3-LP set on pink vinyl is due out in September on Vinyl Me Please and will feature cover versions of Schlesinger compositions by Tanya Donelly and Gail Greenwood; Kay Hanley; Nada Surf; Rachel Bloom; Ted Leo; and others.

This year’s Hot Stove Cool Music fundraiser will once again be a virtual event, taking place on May 18, starting at 7:00 pm EDT. Organizers Theo Epstein and Peter Gammons have assembled another winning lineup of popular athletes and musicians; this time featuring Yo-Yo Ma, Boston Celtics majority owner Wyc Grousbeck, Juliana Hatfield, Bernie Williams, Kay Hanley and surprise guests. Admission charges range from a $10 Single Ticket to the $1,000 Grand Slam, depending on how much you’re willing to donate. 100% of the proceeds go to The Foundation To Be Named Later, the charity organization founded by Theo Eptein and his brother Paul and The Peter Gammons College Scholarships.

Chicago-based singer-songwriter Lou Heneise goes for a traditional folk sound on her debut Trial and Error and succeeds nicely. The four tracks feature Heneise up front on her acoustic guitar, with a boost from drummers Sarah Neczwid and Eric Mahle, and bassist/guitarist/producer Eric Block. Heneise’s clear, pretty vocals help sell the imaginative romantic fantasy of “Bad Day,” and the satirical lust (‘And I’m using boys like chewing gum./But ain’t a girl supposed to have her fun?”) of “Red Lights.”

The Art Of Banksy, which is billed by its production company Starvox Exhibits as the world’s largest collection of privately owned work by the mysterious English street artist, will be visiting Chicago at some point in the near future. Sign up for information on the official site to be given first access to tickets.

The Go-Go’s are celebrating the 20th anniversary of their underrated God Bless The Go-Go’s album by releasing a version on 140GM blue vinyl. There will also be a special edition with two extra tracks exclusively on CD and digital platforms. The release date for these versions is May 14, and they are already available for pre-order.

I used to think the only thing actor George Wendt from Cheers and I have in common is that everyone yells my name whenever I go into a bar. Actually, nobody does that. But I learned from a copy of Chicago magazine that came with last Sunday’s copy of the Chicago Tribune that Wendt’s colorful resume includes a stint of working as a proofreader. I’ve been a proofreader for decades. Back in 1966, he occasionally helped the proofreading staff at the Daily News. In the magazine monthly Backroom feature, Wendt also recalls his early days at Second City and performing as Edna Turnbland in Hairspray on Broadway.

Posted by Terry Flamm at 9:45 PM No comments: