I Heard It Through The Wrigley Field Vines 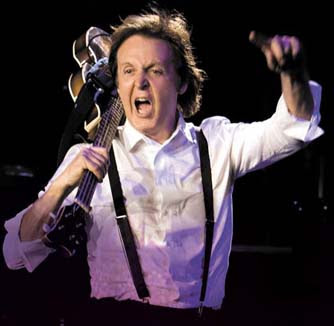 “And I say the Cubs are gonna win the World Series!” Photo from Paul McCartney’s official website.

At the risk of jeopardizing whatever modicum of rock critic credibility I may have acquired over the decades, I have to admit to some major gaps in the truly essential rock icons I’ve seen perform live. The Beatles top that list, both as a band and as solo performers. So even though I didn’t have a ticket to Paul McCartney’s concert at Wrigley Field last night, I traveled from Palatine to the north side of Chicago on the chance that I could at least hear him playing, even though I would be outside the venue.

For those who aren’t familiar with Chicago or major league baseball, Wrigley Field is the home of the Chicago Cubs. It’s an open air stadium (just about the oldest left in the country), and situated in one of Chicago’s most happening neighborhoods. The Cubby Bear and Metro rock clubs are both within walking distance, and there are countless trendy bars and restaurants. As I expected, the entire area was in a festive mood when I hopped off the No. 22 bus at Belmont about 15 minutes before show time. Clark Street was busy with traffic, including some limousines, as well as a number of bicycle-powered rickshaws. One rickshaw sped by with at least six young revelers clinging to it, calling to mind the partying Who townspeople on Christmas morning in How The Grinch Stole Christmas.

One of the restaurant windows sported a handwritten sign that read, “Hey Paul, get your pints and pies in here!” Other businesses had round signs from the Central Lakeview Merchants Association welcoming McCartney to the neighborhood. I passed by a group of young women outside a bar who were greeting anyone who walked by. One of them noticed my Beatles t shirt, slapped me on the back and asked for a high five, but my momentum had already carried me past her. All kinds of people were hanging around outside Wrigley Field but there was plenty of room to wander down Addison, Sheffield, and Clark. Scalpers were hawking tickets, and some deranged homeless guys were lurching through the crowd, yelling, “Who’s got tickets?” About a half hour after the concert was scheduled to start, there was still no sound of Sir Paul emanating from the Friendly Confines. I was beginning to fear my trip would be in vain, and that I wouldn’t be able to hear the concert from outside.

As I wandered down Addison to Sheffield, I could hear the crowd inside cheering and McCartney playing “Hello Goodbye,” and the sound quality was great. What a thrill to hear Paul McCartney performing a Beatles song in person. The people gathered on Sheffield were in high spirits, singing and dancing along with the music, chatting with friends, and sometimes just grinning at what they were experiencing. A dad held hands with his two young daughters while they danced in a circle. McCartney continued with a rousing version of “Junior’s Farm.” I could hear most of his comments between songs, and got chills when he called out, “Here’s one you may remember,” before launching into “All My Loving.” I could see a puzzle piece of the big screen inside the stadium from where I was standing, and from time to time, McCartney’s face appeared on it.

I wasn’t able to catch all of the anecdotes McCartney shared with the audience, but I heard bits about how thrilled he was to be playing at such a historical venue; a tribute to Jimi Hendrix that followed “Let Me Roll It”; and memories of playing guitar with George Harrison back in Liverpool. And the great songs kept coming. “Jet,” “Drive My Car,” “On The Night Before,” “Maybe I’m Amazed,” and “Paperback Writer” were all delivered via McCartney’s high energy performance. “Is that you screaming?” he asked at one point, presumably addressing everyone in attendance. Even the more subtle tunes like “Long And Winding Road,” I Will,” and “Blackbird” drifted over the ivy-covered wall with perfect clarity.

Having a long and winding road myself back to Palatine, I departed Wrigleyville shortly after the one hour mark in McCartney's concert. It was heartbreaking to leave so early, but I had achieved what I had come for. Hearing one of the greatest performers in rock and roll.

I was lucky enough to see Paul back around 1990, I think? I saw him bother at the Rosemont and at Soldier Field.

Incredible how his voice has held up over the years.