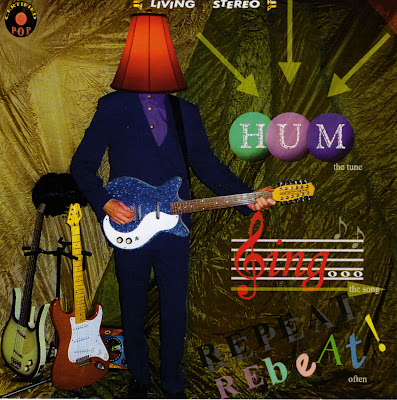 Rock critics are sometimes accused of simply comparing new music to older songs rather than coming up with an original description or analysis. Singer-guitarist Gary Ritchie, a longtime player on the power pop scene, must be okay with the process, because he’s provided a cheat sheet for the 18 catchy tracks on his latest effort, Hum, Sing . . . Repeat!

His influences are fairly typical for a power pop musician; The Kinks, Cheap Trick, Badfinger, The dB’s, etc, but he also gives props to fellow Chicagoans Pezband and Off Broadway, as well as the lesser known but still worthy Katydids. For the most part, Ritchie succeeds in emulating his heroes, particularly when he credits Gary Lewis and Nick Lowe for the easy-going “Hear From You,” or describes the sock hop romp of “Pretty Little Gina” as an Everly Brothers/Ramones mashup.

Ritchie experiments with other genres too, like the rockabilly “Fancy Two-Tone Car” or the bluesy “Scene Of The Crime.” Occasionally, his penchant for layering his vocals adds a bit too much sweetness, especially on “Do Or Die,” which should be more harrowing in its depiction of drug abuse. Likewise, he could have left the British Invasion harmonies off “Girl Like You,” which is supposed to lean more toward 1980s new wave.

Still, there’s plenty of good tunes on Hum, Sing . . . Repeat! The catchy “Cold Lies” dates back to Ritchie’s days with the pioneering Chicago power pop band Loose Lips, while “Never Again (Until Tomorrow)” and “Could Gave Been Love” are guitar-driven gems.