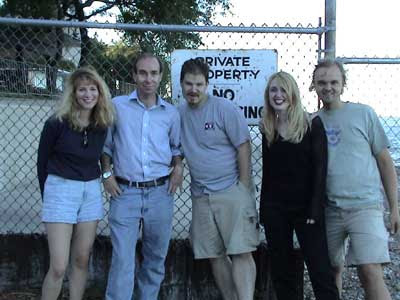 I used to be Famous. My comedy group back in 2002. Left to right: Karen Yashon, me, Guy Schingoethe, Desiree Burcum, and Frank Carr. Carr and Burcum are still in the group.

Now that the dust has settled after Pitchfork in Union Park, Paul McCartney in Wrigley Field, The Fest For Beatles Fans in Rosemont, and Lollapalooza in Grant Park (actually, there’s more mud than dust in Grant Park right now), Chicagoans might be seeking that next big event. For those with an interest in theater, comedy, and performance art, it could very well be Abbie Hoffman Died For Our Sins XXIII. The three-day, virtually non-stop event is held each year by the Mary-Arrchie Theatre sometime around the anniversary of the original Woodstock festival. It’s coming up in less than two weeks, from August 19th to the 21st, with over 30 acts participating.

Mary-Archie Theatre’s Artistic Director Rich Cotovsky has been overseeing Abbie Fest, as it’s more commonly known, since its birth in 1989. He channels the spirit of Yippie leader Hoffman during a kickoff rally and march from the Daley Center at 2:00 PM on the first day of the fest, and returns to that persona for the opening ceremonies later that night, and the closing ceremonies on Sunday night. He can also be seen as Hoffman at other times throughout the weekend, and he’ll be on stage for Mary-Archie’s performances of Wild Dogs by Matt Borczon and Gas Mask 101 by Arlene Cook, as well as the late night audience participation gabfest Bitch With Rich.

The Abbie Fest features performances by some of the more adventurous players on the city’s theatrical scene; like The Factory Theatre, A Red Orchid Theatre, and The Plagiarists. Rush Pearson’s take on the Nicolai Gogol play, Diary Of A Madman is always riveting, even for those who’ve seen it before. My former comedy group, Famous In The Future, has another great time slot this year; they’ll be performing a yet-to-be-named skit and song revue at 7:15 PM on Saturday. Famous In The Future is the only group besides Mary-Arrchie that has been in every single Abbie Fest. This year they’re being followed by an original piece called You Must Believe by Black Forest, the off kilter but always engaging duo of James Moeller and Carla Hayden.

Speaking as someone who performed at 20 of the Abbie Fests, and who still has perfect attendance, I highly recommend this three-day extravaganza. Located in a second floor storefront theater at 735 W. Sheridan Road, it’s a whole lot smaller than some of Chicago’s better known events, but always a lot of fun. I’m hoping to have more detailed information about the various performances as Abbie gets closer. Tickets are $10 for a single day, and $25 for a weekend pass.