Still Smirking After All These Years 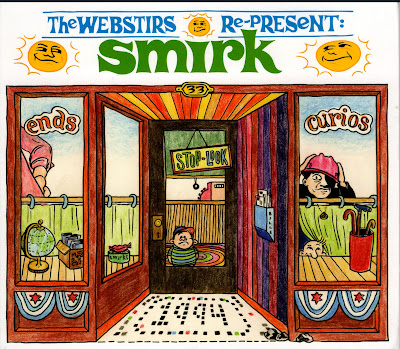 Released in 1994, The Webstirs’ Smirk seemed inspired by the more eccentric pop music of the mid-to-late 1960s. Vocalist-guitarist Preston Pisellini and vocalist-keyboards and accordion player Mark Winkler bring their own offbeat sense of humor to the table, with lyrics that cast doubts on anyone’s ability to succeed in the modern age. On “King,” which artfully blends acoustic and electric guitars, a man wondering if his future holds promise concludes, “Not if 25 years are any indication.” Pisellini and Winkler consistently wrap these observations within catchy melodies.

Seventeen years later, The Webstirs have revisited their impressive debut, giving it new packaging and adding three bonus tracks. The canine hindquarters from the original front cover have given way to a clever parody of The Beach Boys’ legendary Smile album. “I Turn Away,” pulled from the 1992 Chicago Underground Hits At Large compilation, is an energetic power pop gem with Hollies style harmonies, while “Curio Case,” the tale of a lonely woman, has a big, 1970s sound. The remaining previously unreleased tune, “This Old Man” finds The Webstirs employing their harmonies and ringing guitars in another song about finding one’s place in the whole scheme of things.