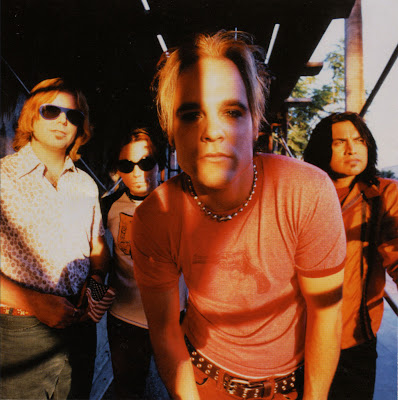 Note: This review originally appeared in the Illinois Entertainer in 2000. Incidentally, it had one of my least favorite CD covers, which is why I’m using a photo from the inside jacket for this post. Judging from their website, The Exies are still active, and toured Russia in 2010.

The self-titled debut from the California quartet The Exies never runs out of melodies or enough energy to punch them across. Much of the credit should go to Scott Stevens, who writes all of The Exies’ lyrics and delivers them via a classic rock and roll voice.

“Feeling Lo-Fi” immediately establishes a penchant for manic pop, as Stevens belts out his frustrations while guitarist David Walsh unleashes a flurry of riffs. Walsh opts for a funkier style of strumming on “Bighead,” an insult song with a chorus that explodes like a time bomb. “Straight Girl Of The Universe” is an unbridled love song that opens with the lines, “I’m in bloom/I go vroom/I go right off without my little parachute.” Other sentiments like, “Put a perfect love attack under the stars” and “She’s so innocently perverse” add to the fun.