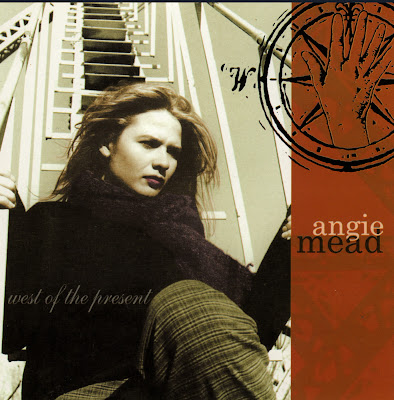 I’ve seen pieces on a new blues/hard rock duo called Redgrave recently in Time Out Chicago and Mary Houlihan’s Clubhopping column in the Sun-Times. It’s comprised of Angie Mead and Stephen Howard. I have to confess that I’m not familiar with Howard, but Mead’s name certainly rings a bell. Back in 1999, I reviewed her West Of The Present CD for the Illinois Entertainer. Here’s that review.

Chicago singer-songwriter Angie Mead may wear her heart on her sleeve throughout West Of The Present, but her hands are clenched in fists. This striking debut only offers six songs, but that’s enough time for Mead to make an indelible impression. Each track proceeds at a deliberate pace but her music never lacks power.

“You Leave” is reminiscent of Tori Amos as Mead’s soulful vocals swoop and tremble as she conveys a feeling of being betrayed. “Silence” continues in the trouble relationship vein, with lines like, “You can’t seem to find the time/To see what hides behind my eyes.” The textured arrangements feature Alison Chesley of Verbow on cello and Mystro Grant on piano, alongside Mead’s acoustic guitar.

“Drown,” with its Celtic melody and imagery of the sea, creates an epic feel. “Six Days” and “Hush” have sparse, electric guitar arrangements that push Mead closer to the edge. When she cries, “Save your life!” on ”Six Days,” there’s a genuine sense of urgency. On a chilling second version of “You Leave,” Mead swaps her rich voice for a corroded whisper, evoking a late-night anonymous phone call set to creepy percussion and strings.