CD Review: The Head - Hang On 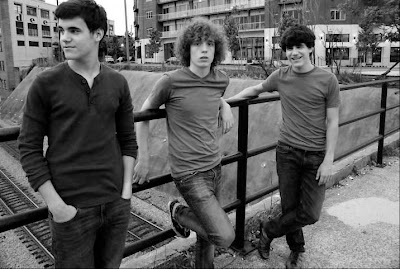 Recent years have seen the power pop genre diluted with overtly commercial bands that pretty much use the same revved-up arrangement throughout an entire CD. So it’s refreshing to find The Head, a young trio from Atlanta not only going old school, but getting it right so often on its latest release. Not everything on Hang On qualifies as power pop, but the band impresses with its willingness to explore a variety of arrangements.

“Only One” evokes Off Broadway with its drum intro and keeps that spirit going all the way through its guitar-driven arrangement. Twins drummer Jack and bassist-keyboards player Mike Shaw share the lead singing duties, and along with guitarist-backup vocalist Jacob Morrell, continually craft some inventive harmonies. “Lady Lovely” is an engaging 1960s style ballad, while “Fine With It” and “Top Of The World” set provocative lyrics to catchy arrangements. Hang On loses steam with some piano-based material toward the end, but until then there are enough ringing guitars to keep things interesting.