Setting A Bad Example In Palatine 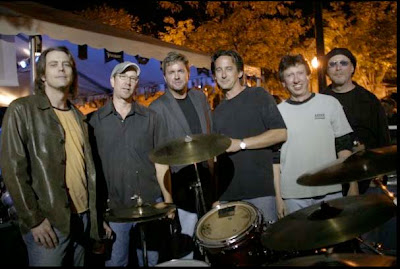 Last year, around this time, I was proclaiming the upcoming performances of The Smithereens and The Bad Examples at the 2010 Downtown Palatine Street Fest. I was looking forward to seeing these power pop veterans on a stage that’s no more than five minutes from my house, and both bands came through with entertaining sets that featured some of their best songs. (See Archives, 2010 August 30th) Within a year, each would release an impressive CD of original material for the first time in the 21st century.

The good news for the 2011 Downtown Palatine Street Fest is that The Bad Examples will be back, playing a set at 2:45 on Sunday afternoon. As I stated in my Illinois Entertainer review of Smash Record earlier this year, (See Archives, April 4th) lead singer-guitarist Ralph Covert has lost none of his song writing abilities, evoking Squeeze with the clever lyrics and irresistible melodies on tracks like “Pictures Of A Masquerade” and “Jayne Left Behind.” The Bad Examples provided more punch on “Big E Chord” and “Devil Is In The Details.” The band also has a catalog of earlier gems to draw from, like “Not Dead Yet,” “A Mindless Pop Song,” and “It’s Over Now.”

Of course, the big news for parents is that Covert will also be at the Downtown Palatine Street Fest on Saturday afternoon at 3:00 PM with Ralph’s World. His catchy and silly tunes are entertaining and often have a useful lesson for kids to take home.

Unfortunately, The Smithereens won’t be back for 2011. In fact, for the first time in years, the Downtown Palatine Street Fest won’t have a national act performing in the Saturday night headliner slot. Instead, we’ll have club veterans Wedding Banned bringing their mix of cover versions and comedic antics to the stage. The festival planners have stacked the rest of the schedule with popular Chicago area tribute bands like American English, Infinity, Sixteen Candles, and ARRA. Each has a large, loyal fan base, and will no doubt keep the party rocking. But it would have been nice to hear a few original acts that aren’t thoroughly locked into the mainstream. Something that would have given the Downtown Palatine Street Fest an edge over all the other suburban summer time bashes.

Downtown Palatine Street Fest kicks off at 5:30 PM on Friday with the youthful ADHD, who earned the gig by impressing the judges at a Battle of the Bands contest earlier this summer. In a post at the time, (See Archive, June 14th) I noted that the trio of young teens made creative choices that leaned toward cutting edge hard rock. Your Villain My Hero, which performs at 4:30 PM on Saturday, has been garnering a lot of attention with its high energy covers of hip hop, dance, and popular hits. Vocalists J. Lee and Zigg have plenty of charisma and vocal chops to expand beyond the local scene, especially if this coed band continues to create original material. (See Archives, 2010 July 5th for a post on Your Villain My Hero performing at Palatine’s 4th of July festival.)

Other bands slated for this weekend include iPop, Brother Tim, Boxcar Dynamite, Suburban Cowboy, Rod Tuffcurls & The Bench Press, and Brass from The Past. The Music Room store will present its Jazz Band at 11:00AM on Sunday. For a full schedule of bands and other activities, see the Downtown Palatine Street Fest website.