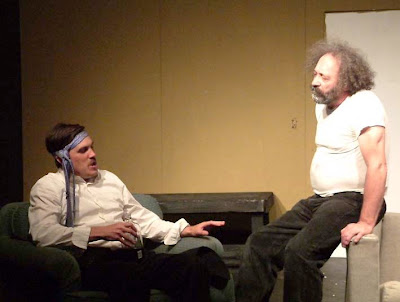 So my record of having attended every Abbie Hoffman Died For Our Sins theatre festival is still intact. I dropped by the Mary-Arrchie Theatre on Saturday and Sunday, catching productions by various local theatre groups. This was the first year I noticed people using smartphones. Some of the performers checked in on them in the waiting room just before going on; audience members took them out during the downtime between shows, and sometimes even during shows; and a few productions used them as props. Back in 1989, when the first Abbie Fest was held, no one would have been able to imagine such devices.

A lot of things about Abbie Fest have stayed the same over two decades though. Mary-Arrchie Theatre Director Rich Cotovsky effectively channels the spirit of the late Mr. Hoffman; people stay extremely late watching shows; and the various participants hang out together, swapping war stories and developing friendships. A lot of new groups are able to cut their teeth at Abbie Fest in a supportive atmosphere, even when their efforts are amateurish, bewildering, or just plain dull. That’s another aspect of the Abbie Fest: the quality varies from extremely good to the occasional - - well at least they tried. Often, the newcomers learn from the experience, and get better.

Cotovsky was sitting in the stairwell of the theatre, beside a young woman who took my $10 and handed me a day pass. He mentioned that he could use a nap (he hardly gets any sleep over the weekend) so I told him when I used to perform with the comedy group Famous In The Future, we had a running joke that he always scheduled one of his naps during our show. Cotovsky laughed and said, “That was no joke.” Teasing aside, it’s always fun to talk to him. I also ran into James Moeller and Carla Hayden from Black Forest, and Pat Über-Critic McDonald, who occasionally performs with them; Simone Jubyna from Citizen’s Relief (unfortunately they didn’t perform at Abbie Fest this year); and the members of Famous In The Future.

I'll fight the temptation to wish the group had crumbled following my departure in 2009, and acknowledge their show was good again this year. An opening bit about the sun wanting to quit her job of warming the galaxy was imaginative and fun, as were a Wizard Of Oz political parody and skit about a woman who hordes human beings. After having performed with Famous In The Future at Abbie Fest for 20 years, watching them from the audience felt like being Scrooge when the Ghost Of Christmas Future takes him to the stock exchange. Still, things change over the course of 20 years, and sometimes people move in different directions.

Black Forest performed a new show titled You Must Believe, which mixed Moeller’s live guitar playing, Hayden reciting of beat poetry, and both of them comically coming to terms with a mysterious beast lurking just outside their door. Other highlights included Ludamus doing a terrific job of bringing the Peter Barnes absurdist play Nobody Here But Us Chickens to life; the funny and on the mark acting in The Side Project’s performance of Mark Young’s The Billing Project; the high energy American Agency brought to Angela Bassett’s weird but fascinating American Agency; and the campy detective spoof of Jessica Wright’s Parrot Love, as performed by Tempting Fates.

Steve Evans of Trained Monkey Productions proved there’s still a place in this freewheeling festival for a well-delivered and droll monologue, with his My Life With The Shawnee, while Dandelion Arts mined the comic possibilities of Brooke Johnson and Dina Klahn’s look at modern dating, Lucky At Cards? Gavin Robinson and Rich Cotovsky carried on the Mary-Arrchie tradition of performing Matt Borczon’s Wild Dogs; once again making it both tense and funny.

This is in no way meant to be a comprehensive review. It's just a sample of the enjoyment to be found in attending a weekend festival sponsored by one of Chicago's more cutting-edge storefront theatres.