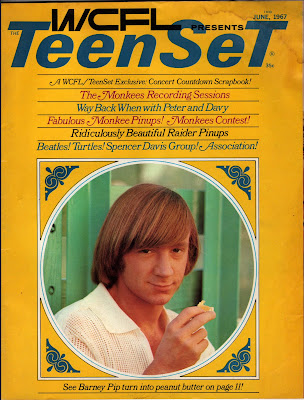 Last Saturday, while I was talking to members of Famous In The Future after their comedy revue at the Abbie Hoffman Died For Our Sins XXIII festival at the Mary-Arrchie Theatre, writer-performer Desiree Burcum told me how exciting it was to meet Peter Tork at the recent Chicago Wizard World Comic Con. So, in honor of her encounter, here’s a look at WCFL Presents The Teen Set from June, 1967.

I don’t have a great deal of nostalgia for this particular radio station since back then, I always listened to its main competitor, WLS. The most I know about the WCFL air personalities was that Jim Stagg was tight with The Beatles, and Barney Pip’s schtick involved playing some sort of horn and turning people into peanut butter. The station did create the coolest accessory any teenager could acquire at that time; the tiger-striped I’m Bold! button.

Actually, The Teen Set appears to have been a national magazine that was locally sponsored by WCFL, as opposed to an entirely homegrown effort like the Personality Album put out by WLS in 1967. Only four of this issue of The Teen Set’s 62 pages were devoted to Chicago happenings, including a profile of Pip, and a Concert Countdown Scrapbook with photos of Paul Revere and The Raiders, Mitch Ryder, and The Blues Magoos. The “In” Chicago With WCFL column noted that The Buckinghams had left the Chicago-based USA Records for Columbia Records, and that both labels were simultaneously promoting the group’s products. There was also a reference to a new wax museum in the Old Town neighborhood.

On the national front, songwriters-producers Tommy Boyce and Bobby Hart reflected on working with The Monkees in the recording studio and on the TV show. The Hollywood Underground column breathlessly covered a star-studded bash in honor of Buffalo Springfield, and included a pic of Tork conversing with folkie Peter Yarrow. Writer Laurayne observed that Tork “spent most of his time sitting on the floor chatting with a cute blond (Stevie Stills) but I managed to at least get close to him.” Elsewhere in the mag, the cute Stills, writing with Assistant Editor Ginni Ganahl, described his early days of hanging out with Tork in Greenwich Village playing music in the “basket houses.” (Apparently a reference to how money was collected from audiences.)

Editor Judith Sims interviewed The Doors, claiming it was “their first ‘structured’ confrontation with the press.” She found them to be on the quiet side. There were also profiles on The Turtles, The Association, Spencer Davis Group, and The Beach Boys. Of course, no 1960s teen mag would be complete without tons of photos, and The Teen Set obliged with a centerfold of The Byrds, as well as full page shots of Tork and Mike Nesmith. My favorite is a zany B&W portrait of Neil Young.

There wasn’t much advertising other than a two-page spread for Clairol’s Summer Blonde, and full page ads for Cover Girl, Fresh-Start skin cleanser from Ponds, and the Georgy Girl album by The Seekers. A half page ad for subscriptions to The Teen Set proclaimed “all goods things come to those who wait at their mailboxes.” The price was $3 per year.