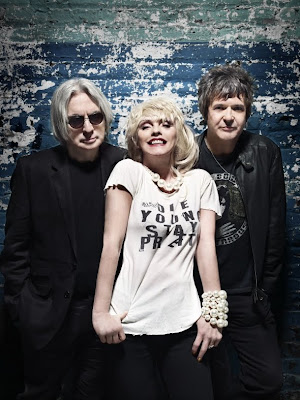 Picture this: They’ll be at The House Of Blues on September 7th. Photo from Blondie’s website.

The Abbie Hoffman Died For Our Sins XXIII theatre festival kicked off today at the Mary-Arrchie Theatre, and runs all weekend. See my earlier post today for the complete schedule.

Three bands that each take a different approach to indie music, the harder-edged Farewell Captain; the lighter and melodic The Bon Mots; and the off kilter but melodic Penthouse Sweets, are on a triple bill at Quenchers on Fullerton tomorrow night. The show starts at 10:00 PM.

Tickets went on sale earlier today for The Bangles October 10th gig at The House Of Blues. Sweetheart Of The Sun, the band’s first CD in several years, will have just been released by then, so it should be interesting to see how much of the new album gets mixed in with their big hits. Certainly, their cover of the Nazz tune “Open My Eyes” should be included in the set. In other Bangles news, Susanna Hoffs mentions in an interview with the online mag Culture Brats, that she’ll be releasing another CD of cover tunes with Matthew Sweet. Under The Covers III will find the duo moving up yet another decade, and covering hits from the 1980s.

The Handcuffs have been tabbed to open for Blondie at The House Of Blues on September 7th. The Chicago indie rock band will be armed with a new CD; Waiting For The Robot, their strongest release to date, comes out the day before.

Covers for Cover III is still looking for female musicians to take part in its November 17th benefit at Schubas for The Primo Center for Women and Children on Chicago’s Westside. The concept involves rock and roll women covering popular bands to help homeless women find shelter. The lineup so far looks promising, with Surfer Rosa as The Pixies; Parkway as The Buzzcocks; Planet Claire as The B-52’s; The Lady Sentinels as Britney Spears; and Sound Board Collective as The Pretenders. Organizer Mia Park explains that participating bands will have “a strong female presence & have female front people or have at least 50% women.” Admission is $10 in advance, $12 at the door. The Covers for Cover series has raised $4,000 through its concerts since 2006. Schubas is located at 3159 N. Southport in Chicago.

The Del Moroccos, a fun rockabilly/R&B outfit comprised of three female singers and five musicians, has a gig coming up on Saturday, September 3rd at Fitzgeralds in Berwyn. L.A.-based one-man rockabilly band Deke Dickerson is also on the bill that night.

Little Steven’s Underground Garage Facebook page has posted his Top 30 Garage Rock Songs, with “I Can Only Give You Everything” by Them taking the #1 slot. Other worthy selections include “Gloria” by the Shadows Of Knight, “We Aint Got Nothing Yet” by The Blues Magoos. “I Had Too Much To Dream” by The Electric Prunes, “Friday On My Mind” by The Easybeats, “Dirty Water” by The Standells, “Lies” by The Knickerbockers, “Psychotic Reaction” by Count Five, “Open My Eyes” by Nazz, “Pushin’ Too Hard” by The Seeds, and “Itchycoo Park” by Small Faces.

Could Be We're In For A Tribute. A Cryan Shames Tribute, featuring former member James Fairs will be held online via the American and British Early-to-Mid ‘60’s (&at times, late 60’s) Pop Cullture Facebook page tomorrow night from 7:00PM to 9:00 PM. The web-based tribute will be hosted by Joanie Baker and Bob Nasca, and feature a bunch of vintage Cryan Shames YouTube videos. The hosts will chat with Fairs about his spanking new website.

The hard rock quartet Faith In The Fallen will be hammering out tunes tomorrow night at the Bada Brew Bar & Grill in Crest Hill tomorrow night. Skull King is also on the bill. Show time is 9:00 PM.