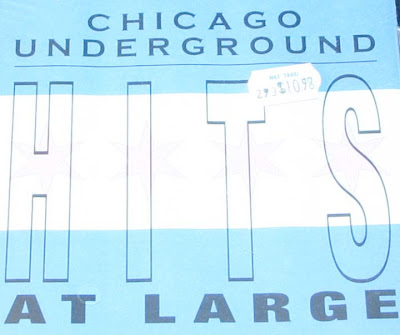 While writing yesterday’s post about the recently re-released Smirk by The Webstirs, I mentioned a various artists collection called Chicago Underground: Hits At Large. That got me thinking about the CD, which I still have. So, here’s a review I did for the Illinois Entertainer back in 1992. I also did an interview with Mike Galassini of 92 Degrees for an article in Streetwise, the Chicago paper that benefits the homeless. Unfortunately, the people at Streetwise used the jacket from my CD for the article and never returned it. Thus, I’m using this faded image I took off an eBay listing. Note: Back then, The Webstirs spelled their name as two words.

Chicago Underground: Hits At Large is a musical co-op, with six area bands joining forces to produce their own CD for Big Block Records. All of the music falls within the realm of alternative pop, although each group succeeds in exploring its own particular shade of the genre.

The catchy power pop of “Mrs. Jones” and “In Her Glow” by 92 Degrees serve as a reminder that Big Block was the indie label founded by Jim Ellison before Material Issue signed with Mercury. Crackpot Messiah checks in with the melodic rock of “Leave Her The Coins” and “Anything.”

Hushdrops offer some neo-psychedelia with the dreamy “Snow,” and crank up the energy on “Myrtle.” The hardest hitting material comes from the band Billy Pilgrim, on their two tracks, “Crayola” and “Down.” The Shanes engage in extensive jamming on the politically-minded “How The Innocent Die,” and opt for a classic 1960s arrangement on “You Keep It Going.”

The Web Stirs have harsh words for America’s educational system. - “Four years of failing and falling behind" - on their zydeco-flavored “I Turn Away,” while their sardonic and catchy “It’s Over Now” serves as a fitting closer for this impressive musical sampler.

A friend of mine just found your blog and post as he and I were exchanging emails about a Brad Wood discography he was viewing. I had replied to him reminiscing about recording 3 or 4 songs demo with Brad Wood at his Idful studio in Wicker Park back in 1991. Then my friend and I got to talking about those demos I made with the band I was in at the time and where those songs ended up. I told him about Chicago's Underground: Hits at Large and he then searched the net to find out more about it...and here we are! It was cool to see your review from that issue of the IE that you have posted here. Thanks, it brought back great memories of playing the cd release show at (then "Cabaret") Metro with the Webstirs, 92 Degrees, and all the other bands on the cd. Oh, forgot to mention, I was the drummer in Crackpot Messiah. I left the band in '93, but the other blokes keep playing out every so often, to this very day.
Oh...and if I may also throw in a bit of unsolicited trivia...I remember talking to the guys in Billy Pilgrim (and your review was right, theirs were best tracks on that cd), and I asked the singer about the "other" Billy Pilgrim from Atlanta (they had some commercial success and radio airplay of their single "Sweet Louisiana Sound" in the early '90s). Anyway, I think I recall the singer of the Chicago Billy Pilgrim told me that he was contacted maybe by the record company and asked about switching the name because of the Atlanta Billy Pilgrim. Oh well, I guess that was reeeeally trivial. Well, I enjoyed the post and your blog. Thanks!