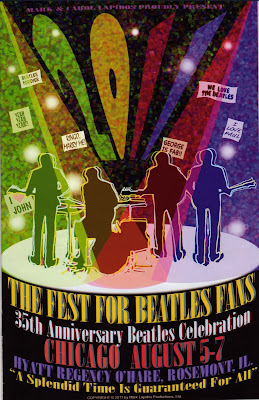 The Fest For Beatles Fans once again proved to be a multi-faceted delight this past weekend as it marked its 35th anniversary of coming to the Midwest. Even for those of us who didn’t spend the entire weekend at the Hyatt Regency O’Hare in Rosemont, there was plenty of activity going on Saturday to keep us satisfied. The event’s format of live entertainment, celebrity guests, interviews, special presentations, art work, photography exhibits, and a huge marketplace has held up well over three decades. That’s primarily due to the staying power of The Beatles, but credit should also be given to organizers Mark and Carol Lapidos, as well as long-time participants like WXRT radio personality Terri Hemmert, writer/producer Martin Lewis, and the tribute band, Liverpool.

Lewis was missing in action for much of the day due to being involved with a charity event, which left Hemmert to conduct almost all of the celebrity interviews. Entering her 34th year as The Fest’s Master Of Ceremonies, she has established a rapport with several musicians. Sadly, Paul McCartney, who as Hemmert pointed out several times during the festivities gave her a big hug earlier in the week prior to his concert as Wrigley Field, wasn’t among this year’s guests. But Badfinger vocalist-guitarist Joey Molland and singer-guitarist Peter Asher of Peter and Gordon were, and each was quite funny in his own way. Former Wings guitarist Henry McCullough was more sedate, but his anecdote about talking McCartney into letting him (McCullough) come up with his own solo for “My Love” definitely made for interesting conversation.

Asher’s mid-afternoon presentation of A Musical Memoir Of The 60s & Beyond Part One was a definite crowd pleaser. Opening with a video that featured Monty Python alum and Spamalot creator Eric Idle worked brilliantly, particularly the way Asher and his musicians interacted with it. There was a definite touch of Pythonesque humor as the on-screen Idle stopped the live band from performing by demanding to know where Gordon Waller was. When Asher replied that his former musical partner had passed away, Idle sniffed, “Well, he was the only one I liked.”

Asher proceeded to spin interesting tales from his involvement with the original British Invasion, including how he booked Yoko Ono for an art gallery/bookstore he ran called Indica, and introduced Marianne Faithful to Rolling Stones manager Andrew Loog Oldham. He performed a handful of songs with his band; including a duet with the on-screen Waller on Buddy Holly’s “True Love Ways,” and closed with the McCartney-penned “World Without Love.” Asher was scheduled to present A Musical Memoir Of The 60s & Beyond Part Two, which would likely cover his highly successful career as a record producer, on Sunday.

Between the interviews and presentations, there was time to check out the marketplace, which featured artists and authors as well as countless merchants selling tons of Beatles paraphernalia. My favorite new items this year were the Yellow Submarine ice cube trays and cookie cutters. The writers, like Bruce Spizer (whose just released his seventh volume on Beatles U.S. record releases), David Bedford (Liddypool: The Birthplace Of The Beatles), and Jude Southerland Kessler (who just released her second extensively researched book on John Lennon, Shivering Inside) were eager to discuss their work. Artist Eric Cash, who’s created some amazing portraits of The Beatles at various points in their career, was also very approachable, and told a few visitors to his booth how much he was looking forward to his first trip to Liverpool.

Scattered throughout small rooms on the first floor and lower level, there were exhibits like The Lost Beatles Photographs, a collection of candid shots taken by Beatles tour manager Bob Bonis from 1964-66; photographer Roger Farrington’s The John Lennon 30th Anniversary Portfolio, photographs of John Lennon and Yoko Ono from their Double Fantasy recording sessions; and a gallery of fan art that would be judged in a contest on the following day. The amateur musicians who spend just about the entire weekend performing Beatles songs under the stairway to the lower level have gained a loyal following over the years, and they had a lot of people singing along with them on Saturday.

Lewis arrived later in the evening, and as usual, had some interesting things up his sleeve. He opened by interviewing producer-musician Mark Hudson, who started out as a member of the comedy musical group The Hudson Brothers and went on to produce Cher and Ringo Starr. Hudson can be a loose cannon, but he’s also a talented and knowledgeable musician who mixes interesting insights within his crowd-pleasing buffoonery. Lewis then showed unedited footage from McCartney’s Kennedy Center Honor ceremony, including touching shots that weren’t shown on the TV special, of the former Beatle reacting to the musicians paying tribute to him.

Liverpool once again performed letter-perfect renditions of Beatles songs via some amazing harmony vocals and first-rate musicianship. Augmented by imaginative Pig Light Show effects, the band covered a range of material from “This Boy” to “Glass Onion,” and threw in some Ringo Starr and John Lennon solo material, as well as The Traveling Wilburys’ “Handle With Care.” About an hour into their set, Liverpool invited Molland to join them on Badfinger hits like “Baby Blue,” “Come Ad Get It,” and “No Matter What,” with Hudson joining in on the fun. After Molland left to a standing ovation, McCullough came out for rousing renditions of “Live And Let Die” and “My Love.”

As I made my way out of the Hyatt, Molland was happily conversing with some fans in the lobby, and the musicians under the stairs were still performing at full tilt. One of these years, I’ve got to come for the entire Fest For Beatles Fans weekend.

Never been to one of these, surprisingly. Would've liked to have seen Molland.