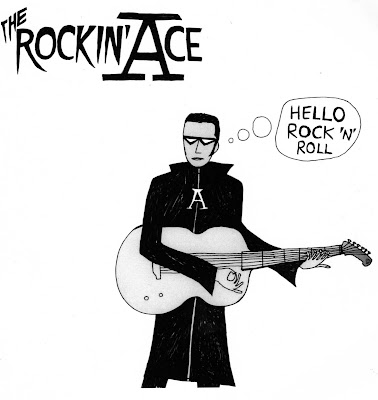 Note: These reviews originally appeared in the Around Hears section of the Illinois Entertainer.

The Rockin’ Ace’s “Hello Rock ‘N’ Roll” 45 RPM single and the comic strip it springs from are both created by musician/artist Slink Moss. A former member of The Farmers, Moss continues in a similar roots rock/1960s vein on this fun, guitar-driven party tune, as well as on the soulful and more subdued B-Side, “Light A Fire With Desire.”

Power trio Even Bigger cranks out a half dozen high energy songs that tap into The Clash and The Ramones on its In Actual D EP. “Hold Up” is a cautionary tale about robbing people with your girlfriend, especially when her itchy trigger finger points toward you, while on “Breathe,” it’s the boyfriend who has homicidal urges. Guitarist-vocalist Matt Myers, bassist-vocalist P. Matthew Hart, and drummer Ray Losch keep the adrenalin pumping, particularly on the raging “Wrong Again.”

Chicken On A Bicycle, the second effort from Hop On Pop, a duo comprised of singer-guitarist Todd Leiter-Weintraub and drummer David Kling, holds up well considering Leiter-Weintraub confesses to having “indulged every little whim and odd thought” in putting it together. There’s plenty of genre-hopping, from the harrowing acoustic tale of an abusive husband on “C’mon Angel” to the new wave silliness of “Here.” Leiter-Weintraub gravitates toward the absurd, particularly on the acoustic “Sheila Of The Worms.”