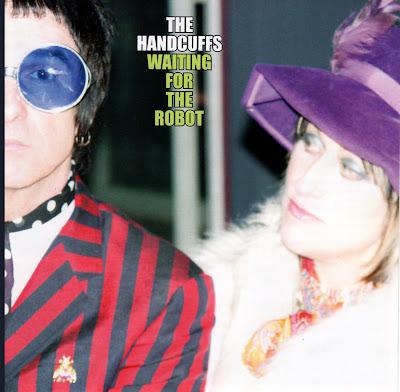 Just A Song Before He Goes. Dennis Florine, the singer-guitarist who opened last week’s Blue Whiskey Film Festival in Palatine with an impressive concert with his band The Messengers, has a solo gig in Chicago tonight. He’ll be performing an acoustic “Goodbye Chicago” show at The Irish Oak on 3511 N. Clark Street in Chicago. The show starts at 10:00 PM. Florine isn’t mad at us; he’s getting married and moving downstate.

Land Ho! Expo. Expo 76 sets sail for the Landshark Beer Garden on Navy Pier later this afternoon with a cargo of eclectic cover versions. The show starts at 5:00 PM, so be sure to drop by after work and order a tankard of ale.

The Wait Is Over. Earlier today, I submitted my review of The Handcuffs’ latest CD, Waiting For The Robot to the Illinois Entertainer, so the world will have to wait with bated breath to see what I thought of it. (Hint: If I hated the CD, I wouldn’t be talking about it here.) Or, everyone can judge for themselves by dropping by the Abbey Pub tomorrow night when the band holds it CD release party. The Blissters and Penthouse Sweets are also on the bill. This would be a perfect opportunity to check out The Abbey, which recently went through an extensive, TV show-funded renovation.

Take Me To The River. Elgin is presenting its annual Art & Soul on the Fox festival this weekend, from 11:00 AM Saturday through 5:00 PM Sunday. Artist David Metzger, who portrayed the obsessive, Beatles button chasing fiend on my Manchester Gallery comedy clips on the Sunday Morning Coffee With Jeff Internet show, will be displaying his weird but entertaining artwork at Booth 51.

Honky Tonk Happenings. Musician/comedic performer Dave Drazin, a former member of my old comedy group, Famous In The Future, will be joining resonator guitarist/snare drum player Dennis Leise for some country, blues, and ragtime this Sunday at the Honky Tonk Barbecue Restaurant in Chicago. Drazin will be performing during the last hour of Leise’s 4:30 - 7:00 PM set, just prior to headliners the Fat Babies jazz band.