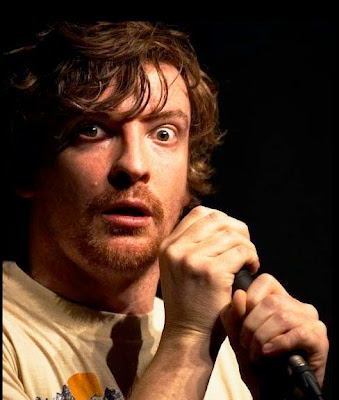 Darby & The Laughing People. Actor/comedian Rhys Darby, who played the hilariously inept agent Murray Hewitt on Flight Of The Conchords, will be performing stand-up this weekend at The Improv, at 5 Woodfield Road in Schaumburg. He has shows at 8:00 and 10:15 tonight; 7:00 and 9:15 PM Saturday, and 7:00PM on Sunday. According to the On The Town section in today’s Chicago Tribune, Darby is also slated to begin filming a new series for CBS called How To Be A Gentleman.

It’s My Party And I’ll Lie If I Want To. Back on April 1st, as part of my second annual April Fools Day post, I stated that newly elected mayor Rahm Emanuel had chosen Broken Hearted Toy to be part of his new One City One Blog program. He designated my birthday, July 25th as the date when everyone in Chicago should visit this site. Well, I made that up, but I still think it’s a grand idea. So be sure to come back here Monday, and tell all your friends to drop by as well. Imagine what a birthday treat it will be when my sitemeter registers over a million hits that day.

Fountains Of Wayne have already decided to join in on the fun by appearing on Late Night With David Letterman on Monday. Don’t know if they’ll actually mention my birthday, but I’m sure it will be on their minds. By the way, their latest CD, Sky Full Of Holes, is a power pop gem.

Keep That Whiskey Flowing. The Blue Whiskey Independent Film Festival rolls on in Palatine tonight. Chris Petlak, who was consistently funny and entertaining as the opening act for Dennis Florine at the festival’s opening night this past Tuesday, has an gig scheduled for Cutting Hall’s outdoor patio at 6:00 PM. Here’s the lineup of films that will shown:

7:00 Yelp: With Apologies To Allen Ginsberg’s Howl A 3-minute experimental effort from director Tiffany Shlain about modern technology, with narration by Peter Coyote.

7:05 Bathing And The Single Girl Director Christine Elise McCarthy serves up an 11-minute comedy about the complications that arise from dating younger guys and hopping in a tub with them.

7:20 The Last Temptation Of Chris A marriage counselor feels conflicted when an old flame and her current spouse come to his office seeking help, in this 12-minute drama directed by Marcus Markou.

Flowers Of Evil Set in Paris and Tehran, director David Dusa’s 98-minute drama centers on a young Frenchman and his Iranian girlfriend, and how their relationship is affected by political unrest and modern technology like YouTube and Twitter.

9:30 Ghost A spirit pays a visit to her parents in this short (8 minutes) experimental film by director Tobias G. Boesen.

9:40 Absentia Director Mike Flanagan’s 91-minute horror film about two sisters who believe a mysterious tunnel is behind the disappearance of several people.

Living With George On HBO. Rolling Stone online reports that renowned director Martin Scorsese has completed a documentary about the quiet Beatle, titled George Harrison: Living In The Material World. It will air in two parts on HBO this coming October. In addition to interviews with George’s widow, Oliva; Paul McCartney; Ringo Starr; Eric Clapton; Yuko Ono; and Tom Petty, Living will include previously unseen footage and photos.

Five Flat Musicians And A Bunch Of Film. The FLAT FIVE, a quintet of veteran singer-songwriters that plays a variety of musical genres, will be making one of its rare appearances at the Old Town School Of Folk Music next Saturday as part of Chris & Heather’s 16mm Film Fest Opening. The band, which features Kelly Hogan, Nora O’Connor, Scott Ligon, Casey McDonough, and Alex Hall, places an emphasis on harmony vocals while covering everything from 1960s tunes by The Beach Boys and The Mamas & The Papas to the country rock of Asleep At The Wheel. As for the fest, indie cartoon artist Heather McAdams and musician Chris Ligon will be presenting an eclectic collection of vintage film clips.

Shakin’ With Schingoethe And The Dames. Faith In The Fallen, the hard rock band fronted by vocalist Guy Schingoethe, a current member of New Millennium Theatre and a former member of my old comedy group Famous In The Future has a hot date with the burlesque troupe The Flaming Dames on July 30th at the Vision night club. Faith In The Fallen will opening for The Dames, who’ll be performing Talk Dirty To Me, their successful revue honoring big hair bands of the 1980s. Vision is located at 632 N. Dearborn.

Their Hearts Belong To Paul. Heart, who’ll be in town on July 28th as part of a double bill with Def Leppard at the First Midwest Bank Amphitheater, has recorded a pair of songs for an upcoming Paul McCartney tribute CD. BB King, The Cure, Billy Joel, and Kiss have also contributed tracks.

Rock, Rock, Rock Rock, Rock And Roll Night School. Next Wednesday, July 27th, the Rock And Roll Hall Of Fame will offer the first in a series of evening classes in the Foster Theater at its museum in Cleveland. The initial installment, titled Women Who Rock (Part 1 of 8) Exploration And Exhibition, will focus on how creative and business opportunities for women have evolved throughout the history of rock. The classes will be held from 7:00 to 8:30 PM on the last Wednesday of each month. Admission is free and reservations are not required.