A Cure For The Summertime Blues 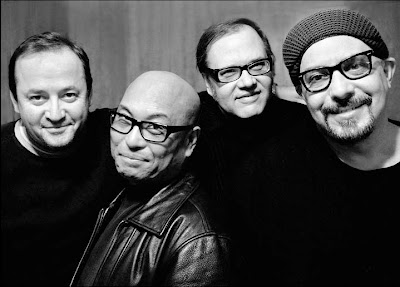 The Smithereens have become regular summertime visitors to Chicago; having played at least one outdoor concert here in each of the last three years. Last Saturday, they headlined the Roscoe Village Burger Fest, a fitting choice considering the band’s long-held meat and potatoes approach to rock and roll love songs. Singer-guitarist Pat DiNizio, guitarist-vocalist Jim Babjak, and drummer-vocalist Dennis Diken have lost none of their regular guy appeal over the past three decades, and Severo Jornacion, who replaced original bassist Mike Mesaros, always seems to be up for a party. I’ve used this comparison before, but it’s still appropriate to say The Smithereens approach every concert as master craftsmen.

The main question going into Saturday’s show was how many songs The Smithereens would play from 2011, their first album of original material since 1999’s God Save The Smithereens. A sensible guess would have been several since it’s an impressive comeback, with songs like “One Look At You,” “Rings On Her Fingers,” and “What Went Wrong” that stand with the band’s best material. (See my full review in archives, under July 4th) So it was surprising that the energetic “Keep On Running” was the only new tune DiNizio & company did during their regular set. They certainly gave it the same intensity they brought to “Behind The Wall Of Sleep” and “Top Of The Pops.” But it was odd that they didn’t hype 2011 more.

If The Smithereens believed people wanted to hear old favorites, they were fully committed to carrying out that mission. “In A Room Without A View” and “Time And Time Again” featured extensive jamming, and at one point, Babjak and Jornacion jumped from the stage and played in the midst of the SRO crowd. After The Smithereens executed a perfect segue from “House We Used To Live In” into “Sparks” from The Who’s Tommy, DiNizio let out a joyous roar. The man enjoys his work. He thanked Chicago and radio station WXRT for always supporting The Smithereens, before a rousing version of “Only A Memory.” The bass-driven “Blood And Roses” remains a stunning showpiece, and the concert ended on a high note with “A Girl Like You.”

I had to leave before the encores (I assume there were some) in order catch the CTA and Metra back to Palatine. So I may have missed a new song in that portion of the show. Still, it would great if The Smithereens came back soon and concentrated more on 2011. It’s definitely an album that deserves to be heard.

Terry, great review. Unfortunately, I had to miss the show. Maybe next year.

The Smithereens remain a constant in the Music World. Even Pat's solo shows are something to behold. (as well as the Living Roon Shows). ONE of these days I will make it out to Scotch Plains, NJ for one of the parties. It's on my "Bucket List".