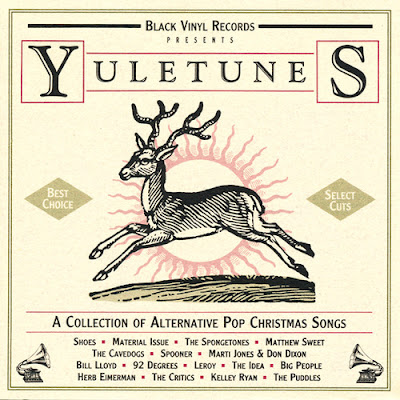 The weekend Posts Of Christmas Past continue with Part Two Of Yuletunes.

The Cavedogs were a Boston band that often mixed comedy with its catchy pop music. That’s certainly the case with “3 Wise Men And A Baby (Xmas Song),” a funny and ambitious epic that begins with a sound bite of Burl Ives’ talking snowman from Rudolph The Red-Nosed Reindeer. About halfway through, the guitar-driven song abruptly shifts into a lounge act reminiscent of the bit Bill Murray used to do on Saturday Night Live. The rollicking finale finds the band singing “alleluia” against a backdrop of George Bailey scolding his kids in It’s A Wonderful Life.

The Spongetones take us to a much more tranquil place with their acoustic-based, innocent fantasy “Christmasland.” While they had shown an ability to mimic The Beatles on their own albums, here The Spongetones craft an old-fashioned Christmas tune with a delicate melody and intricately layered vocals.

Listening to “A God Of My Own” by the Chicago trio 92 Degrees requires some thought since it’s a complex look at religious beliefs at what is undoubtedly the most commercial time of the year. The lyrics, “You go your way and have a Merry Christmas/I’ll go my way and have a Merry Christmas,” express a tolerant attitude that’s sometimes lacking when it comes to matters of faith. With its ringing guitars, the mid-tempo “A God Of My Own” has the British Invasion influence the band tapped into on its 1990 EP, Money Makes The World Go ‘Round.