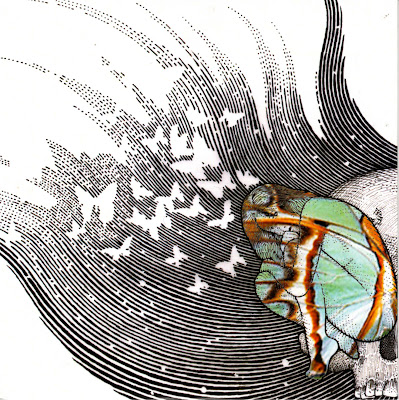 Note: These reviews originally appeared in the Around Hears column in the Illinois Entertainer.

Veteran psychedelic trio The Luck Of Eden Hall has an eternal obsession for the 1960’s, and Butterfly Revolutions Vol. 1 (Vol. 2 will be released soon) could have easily come from that era. There’s plenty of variety amidst the 12 mind-expanding tracks, from the energetic “Chrysalide,” with its references to “frolicking in the sky” to the ornate “Queen Anne’s Lace.” The melodies are consistently inventive, particularly on the high-speed “She Falls Down” and tripped-out “All Her Seasick Parties.”

Team Band’s latest release Vodka Thieves is a nonstop party that fuses punk and garage rock with funny lyrics. Singer Greg Drama makes each song sound spontaneous, whether he’s describing drunken carousing, secret agents, or the cut-throat music biz. On “Not In Love,” he tells the married woman he’s having an affair with he needs cab fare home because, “Last week your husband ran over my bike.” The 007 tribute “Bond” and epic “Team Band Fight Song” are particularly clever.

The mainstream songs on Verona Red’s Pound EP explore R&B, funk, and hard rock, while emphasizing harmony vocals and energetic guitar playing. “Kitchen Song” is a nostalgic blast that sports authentic doo-wop singing, and there’s more fun to be had on the Brian Setzer inspired “Big Mean Boogie.” The band gets a bit bogged down on the heavier “Sweet Rose,” but quickly regains momentum with the melodic funk of “Sunday.”