A Lively Celebration For Live Music 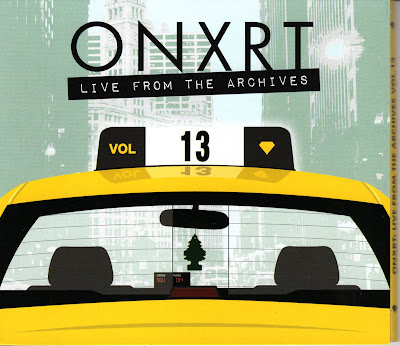 Chicago’s longest-running progressive rocker WXRT welcomed the arrival of its latest volume of ONXRT Live From The Archives with a bash at the Martyrs’ Club on Lincoln Avenue earlier this week. A few of the station’s personnel were on hand to greet fans who had won free tickets to the event, but by the end of the evening, it was a previously unknown band from Louisiana that made the biggest impression.

As with the previous 12 releases in this series, Volume 13 offers exclusive live performances that at some point aired on WXRT. The artists involved were either recorded in the station’s studios or at local venues like Martyrs’, The Abbey Pub, Reggie’s, or The Elbo Room. Proceeds from the CD benefit the Lincoln Park Community Shelter and Partners In Health. ONXRT Live From The Archives Vol. 13 is available at Target stores for a limited time, and it’s a must have for those of us who already own numbers 1 through 12.

There’s only one weak track. Whatever intrigue Mumford & Sons once held has been washed away via the three million hours of airtime XRT has devoted to them, and “The Cave,” with its nonsense lyrics and overly precious vocals, is one of the band’s most annoying songs. The rest of Volume 13 is pretty solid. The Decemberists’ “Down By The Water,” despite being a blatant R.E.M. ripoff is a good song, while Florence + The Machine live up to their reputation with the stirring “Dog Days Are Over.”

There are tuneful acoustic offerings from Ray Montagne And The Pariah Dogs, Dawes, and Amos Lee. Govt. Mule’s “Broke Down On The Brazos” competes with The Black Keys’ “I Got Mine” for the hardest rock track, and Fitz And The Tantrums crank out the soulful “Moneygrabber.” Some acts reinvented their well-known songs in a live setting, such as Michael Franti & Spearhead on “Say Hey (I Love You)” and Foster The People on the disturbing “Pumped Up Kicks.”

The Airborne Toxic Event’s performance of “Sometime Around Midnight,” an emotional portrait of a guy coming unraveled during a chance encounter with an ex-lover, could almost stand as a separate song from the original. Both versions are compelling. The New Pornographers’ “Crash Years” and Death Cab For Cutie’s “Soul Meets Body” stand out as catchy, alternative tunes.

The audience at Martyrs’ for the kickoff party was a mix of the station’s diehard followers and younger hipsters from the Lincoln Park area. PR expert/Corporate Takeover host Kristin Kay watched over her minions as they greeted the crowd and handed out raffle tickets. Program Director Norm Winer came on stage to give props to the behind-the-scenes tech and legal people who help make the CD a reality, and dee jay Marty Lennartz also addressed the crowd.

From that point on, the crowd belonged to the Givers, a quintet of hyperactive Lafayette, LA musicians led by singer-guitarist Taylor Guarisco and singer-percussionist Tiffany Lamson. In addition to dynamic coed vocals, the Givers unleashed thundering drums, percolating keyboards, and careening guitars. The songs weren’t always cohesive but that was part of the fun. Lamson would sometimes coo softly into her mic before attacking her stand-up drum kit like a child having a tantrum. At other times, she belted out lyrics in a style reminiscent of Bjork or Ida Maria. Guarisco was simply a wildman on acoustic and electric guitars.

Norm Winer was standing amidst the crowd, and it was a kick seeing a veteran of the music scene so obviously impressed with a new act. After their rousing set, The Givers thanked the audience and promised to return to the Chicago area soon.