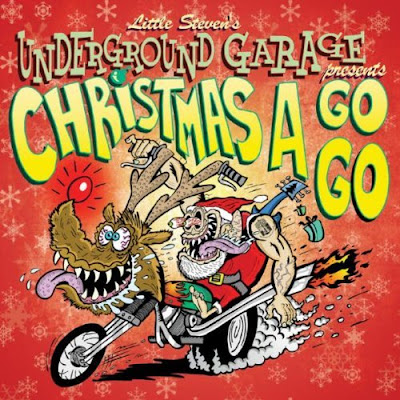 The second half of this weekend's Post Of Christmas Past.

Little Steven Van Zandt was determined to increase the allure of this compilation by throwing in some genuine rarities. It’s safe to say there aren’t too many other holiday CDs that have a surf rock reinvention of “Santa Claus Is Coming To Town” delivered by 1950s kids show host, Soupy Sales. Listening to “Santa Claus Is Surfin’ To Town,” you can almost hear Little Steven chuckling like he does when he laughs at his own jokes on his radio show, Underground Garage. The clever lyrics come in waves of surfer lingo, as Sales describes Santa hanging 10 and delivering toys on his board. People who don’t live near the water can expect to see him making his rounds in his woody.

Christmas songs from time to time have depicted women with romantic designs on Santa, and that’s what the five ladies in the Swedish band, The Cocktail Slippers have in mind on “Santa’s Coming Home.” This catchy number laments the amount of time Santa’s work keeps him away via a Go-Go’s style arrangement with some fun vocal interplay. Actor Joe Pesci brings a wiseguy treatment to Gene Autry’s “If It Doesn’t Snow On Christmas.” Backed by a big band and spouting 1940s style patter like, “I would really feel much better if the mooch could fly a plane,” Pesci makes this version sound like it could have been recorded around the same time as Autry’s.

Singer Rufus Thomas is probably best remembered for his 1963 hit “Walking The Dog,” as well as an earlier duet with his daughter Carla, but he was also an R&B pioneer who first started recording in the late 1940s. The funky “I’ll Be Your Santa” is aimed at women instead of kids, and Thomas has his own concept of what bringing holiday joy entails. The bass guitar is the most prominent instrument in an arrangement that recalls Sly & The Family Stone, while Thomas’s vocals are both ribald and soulful.

Aussie garage rockers The Chevelles unleash a spirited take on a treasured hymn with the mostly instrumental “Come All Ye Faithful Surfer Girls.” The Electric Prunes’ psychedelic and slightly unsettling version of “Jingle Bells” has a spoken word intro that includes a special holiday greeting for Underground Garage listeners. The band then slinks into a slowed-down, heavy guitar arrangement, with vocals that sound like they’re coming from a chorus of over-served elves.

Ray Davies of The Kinks has always been a master of satire, and on “Father Christmas,” he leads the band through a funny tale of a retail store Santa being pummeled by destitute children. Set in Britain’s economically troubled 1970s, the wry lyrics describe the kids screaming, “Don’t give my sister a cuddly toy/We don’t want a jigsaw or monopoly money/We only want the real McCoy.” One kid wants a job for his father so the family will have food to eat. Although Davies clearly meant the song to be funny, he sneaks in a charitable message that’s in tune with the season. “Have yourself a merry merry Christmas/Have yourself a good time/But remember the kids who got nothin’/While you’re drinking down your wine.”