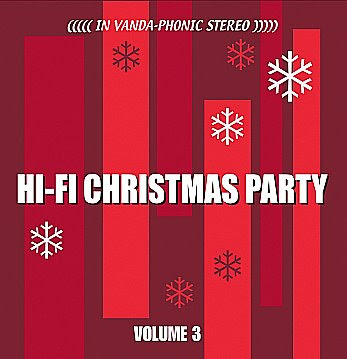 As musician Dan Pavelich of The Bradburys points out in the liner notes for this latest installment in the Hi-Fi Christmas Party series, it’s been eight years since he first hit upon the idea of putting together a holiday CD to help fund research to find a cure for Von Willebrand’s disease. At the time, Pavelich had recently learned that his daughter Mari was afflicted with the rare blood disorder. The first Hi-Fi Christmas Party primarily featured power pop acts exuding a positive vibe through easy-going melodic songs. Nothing too wild, but a fun album that benefited a good cause.

Hi-Fi Christmas Party Volume Three follows in the amiable tradition of its two predecessors, with another selection of mostly original material. Almost half of these tracks were created in the last year, while some have been around a little longer. Lisa Mychols gets the ornament rolling with “Joy Is In The Giving,” a celebration of the season with lines like, “Share the good that comes your way.” Sketch Middle’s “Very Very, Merry Merry” has a Material Issue buzz to it, while The Jigsaw Seen gets psychedelic on “What About Christmas?” The Click Beetles, a Pavelich side project with drummer Ed James; The Yule Logs; and The Sun Kings contribute catchy holiday tunes; as do Jamie & Steve from The Spongetones and Jim Babjak of The Smithereens.

Pavelich invited a few non-power pop acts to join the party on Volume 3. Tinsley Ellis’s “Santa Claus Wants Some Lovin’,” which originally appeared on the Alligator label, is a clever blues romp, and Ash Can School (the married team of David & Janet Aiello) channel early Chuck Berry on “Christmas List Boogie.” The Brothers Figaro Orchestra goes all the way back to the Roaring 20s for a swell take on the standard “Jolly Old St. Nicholas.” And Mari Pavelich recites Linus’s much loved, and often quoted “The Meaning Of Christmas” speech from A Charlie Brown Christmas.

As with the very enjoyable Hi-Fi Christmas Party Volume Two, this third effort suggests this series could become a holiday tradition. The CD can be ordered through Jam Recordings.

Thanks for the review, Terry. I'm glad that you mentioned that it's not all power pop. I like to throw in a few change-ups here and there to keep it interesting.

Makes me want to check it out - thanks for the review!