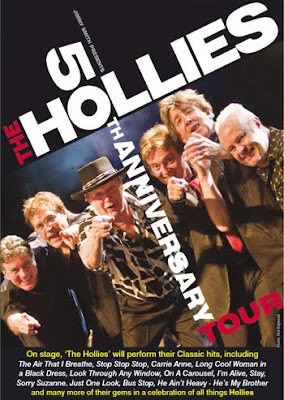 Best wishes for everyone to have a safe and fun New Year's Eve. Be sure to celebrate with music!

According to The Hollies official website, the band’s 2012 50th Anniversary Tour will be making stops in South Africa, Scotland, and England. These are just the dates for February through April. America has become the Island of Misfit Toys in terms of Hollies tours, but maybe this year will be different.

Alkaline Trio has sold out two venues in the Chicago area this weekend. That includes an early gig tonight at Durty Nellie’s in Palatine and a New Year’s Eve show tomorrow at The Metro. After that, the Illinois-based punk/pop band is off to Europe for concert dates in England and Germany. Alkaline Trio released its latest CD, Damnesia, earlier this year.

Other local New Year’s Eve action includes Material re-Issue with the lush and psychedelic Hushdrops and Redgrave (singer-guitarist Angie Mead and drummer Stephen Howard) at Reggies; synth rockers Dot Dot Dot at Giovanni’s in Rockford; 1950s -1980s cover band The Brill Babies, along with The Hornstars at Ballydoyle Irish Pub in Downers Grove; Cage The Elephant at The Aragon Ballroom; and Big Head Todd & The Monsters, Cracker, and Camper Van Beethoven at The House Of Blues.

While there have been countless parodies of public service announcements to prevent certain unsavory trends and behavior, Country & Western star Bryson Jones brings a homespun charm to the one he recently recorded. The Sin City All Stars musician’s ad to save guys from Tiny Cowboy Hat Syndrome is cleverly done, with a sharp zing toward the end.

The Court Theatre, which is now in its 57th season, will present the world premiere of Oren Jacoby’s adaptation of the Ralph Ellison novel Invisible Man. The play, directed by Christopher McElroen, will run from January 12th through February 19th at 5535 S. Ellis on the University of Chicago Campus. Call 773-753-4472 for further information.

Usually, all of the gigs listed on Broken Hearted Toy are in the Chicago area, but here’s one for garage rock fans in London. Happening Magazine, a worthy offshoot of the cool and retro Shindig Magazine, is sponsoring a triple bill at The Drop club. Thee Savage Kicks, The Mobbs (see December 13th post for CD review), and Bow Street Revolt will be performing during the 8:00 PM to 4:00 AM hours on January 7th. The 1960s/1970s inclined DJs, Phil Istine and Steve Coleman, will also be part of the entertainment.The Drop is located below The Three Crowns, 175 Stoke Newington High Street. Looks like these live events might become a regular thing for Happening.

Also, in merry old England, former Doctor Who star David Tennant can be heard narrating Earth Flight, a new nature documentary on BBC One that gives a bird’s eye view of famous landscapes. Perhaps we’ll be seeing it on public telly here in the States some day.