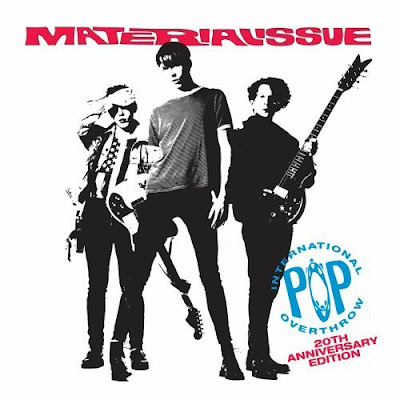 Rather than try to recall a bunch of the year’s musical highlights in a single post, it seems more sensible to scatter them throughout the next few weeks. Here’s the first installment.

The centerpiece of this year’s International Pop Overthrow - Chicago was the Material re-Issue performance at The Abbey Pub on April 23rd. According to IPO honcho David Bash, it was the first time one of his showcases had sold out in Chicago. Original members bassist-vocalist Ted Ansani and drummer Mike Zelenko joined forces with singer-guitarist Phil Angotti to commemorate the 20th anniversary of the release of Material Issue’s debut album, International Pop Overthrow.

Although no one could replace the band’s original lead-singer guitarist and composer, the late Jim Ellison, it was immediately clear Angotti had done his homework for this anniversary show. Material re-Issue performed the entire album in order, starting with the sterling trio of girl songs, “Valerie Loves Me,” “Diane,” and “Renee Remains The Same.” A thrilled audience gladly welcomed Material re-Issue back for a series of encores. With guitarist Jay O’Rourke of The Insiders joining in, the band performed “Next Big Thing,” “Goin’ Through Your Purse,” “Kim The Waitress,” and “Sixteen Tambourines.”

They could have played all night as far as the audience was concerned.