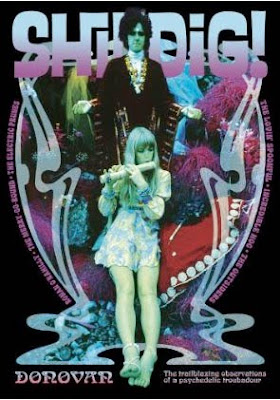 What a cool-looking cover! It’s a safe bet the UK publication Shindig is happy about Donovan going into

the Rock And Roll Hall Of Fame.

An official Broken Hearted Toy congratulations goes out to original British Invasion troubadour Donovan on being picked as one of the 2012 Rock And Roll Hall Of Fame inductees. It would have been nice to see Heart and The Cure get in as well, but there’s always next year.

The Brill Babies will be performing some holiday songs along with their usual variety of cover tunes from the 1950s through the 1980s, tomorrow night at Carlucci’s Restaurant in Downers Grove. HornStars are also on the bill.

Coed alt rockers Magatha Trysty also have a gig tomorrow night. They’ll be performing their original songs at the Stage Bar at 4358 N. Cicero in Chicago.

WXRT radio personality Richard Milne has prepared a special edition of Local Anesthetic, the weekly showcase for Chicago area musicians that airs every Sunday night. The Best Of 20 Years will offer his favorite holiday greetings that have been submitted to his show over the past two decades. Each bit is about a half-minute long, although there are some exceptions. Note: The WXRT website has conflicting air dates for this special, but it looks like it’s going to be this coming Sunday, December 11th at 7:00 PM, with a re-broadcast on next Sunday at the same time. The show can be streamed via the WXRT website.

Singer-guitarist Mimi Betinis has a February 26th date at Durty Nellie’s in my home town of Palatine. His current band’s repertoire includes material from his well-crafted solo effort, All That Glitters as well as four songs from his beloved former group, Pezband. Bassist-vocalist Mike Gorman, who was also a member of Pezband, is going to be a special guest for this gig.

Looks like the Betinis show will be part of a special occasion at Durty Nellie’s. The Illinois Entertainer reports in its December issue that a reunion for Haymakers, once one of the Chicago area’s best-known rock clubs, will be held at Durty Nellie’s on that same Sunday, from 2:00 PM to 11:30 PM. The Haymakers Reunion Facebook page promises it will soon post info regarding all the bands that will be involved. Former IE editor Guy Arnston is one of the event’s organizers.

Joe Algeri, the Austrailian singer-guitarist who records with The Britannicas and seemingly thousands of other bands, has another gift for the holiday season. The catchy “Merry Christmas Around The World,” which is credited to Joe Algeri & The Sugarbrits mixes some gritty Rolling Stones style guitar rock with gorgeous harmonies. It’s available for free download at Algeri’s Bandcamp page.

A few months back, Penthouse Sweets rocked the audience at The Abbey Pub with an short set of Nick Lowe material. Now, the Los Angeles-based Lovers & Poets, a husband and wife duo comprised of singer-keyboards player-programmer Shannon Hurley and bassist Ben Eisen, is honoring ‘Basher’ with a classy version of “Cruel To Be Kind.” The chiming arrangement is lighter than the original hit single and Hurley’s smooth vocals add to this new version’s allure. “Cruel To Be Kind” is available for download on the Lovers & Poets website.

Darby Rhys, who was so funny in Flight Of The Conchords, Pirate Radio, and other TV shows and films, is also a standup comedian. His new performance DVD is now available. Not sure if this is PAL or American format. Rhys will be performing at the UP comedy club in Chicago on the weekend of February 17th - 19th.

“I am a big fan of Howlin' Wolf and was sad to hear that Hubert Sumlin died recently,” Smyth noted. “Imagine Howlin' Wolf taking you under his wing as a guitarist.... Incredible people and incredible music. Was there some kind of tribute to Hubert in Chicago?”

As reported by Dave Hoekstra in today’s Chicago Sun-Times, there will be tribute to Sumlin this coming Tuesday at Fitzgerald’s in Berwyn, starting at 8:00 PM. Mr. Smyth should be proud to learn that his fellow countrymen Mick Jagger and Keith Richards are picking up the bill for the blues guitarist’s funeral.