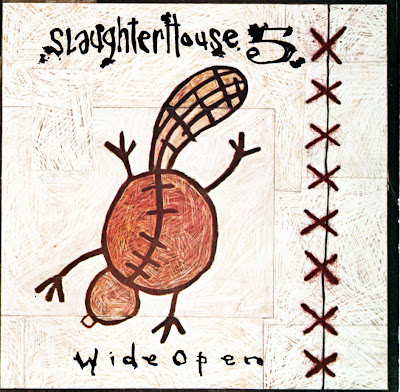 Slaughterhouse 5’s debut CD, Wide Open, should bring a smile to the face of any Anglophile with 14 tracks of catchy melodies and unmistakably British vocals. Lead singer-songwriter Davy Lawrence uses clever lyrics to keep things engaging even when he’s depicting the pitfalls and frustrations of romantic affairs. The Manchester-based group has been racking up comparisons to The Buzzcocks with its energetic arrangements.

Lawrence is particularly effective capturing the anxiety of a guy overwhelmed with a fear of losing his girlfriend on the haunting “If She Leaves Me Again.” “You’re Not So Beautiful,” “Inconvenience,” and “No More Mr. Nice Guy” bristle with hostility. Wide Open has its lighter moments as well, with “Right Next To Her” and “Don’t Go All Funny On Me,” and Slaughterhouse 5 switches from its usual frenetic pace for the more laid back satire of “The Stupid Ones.”