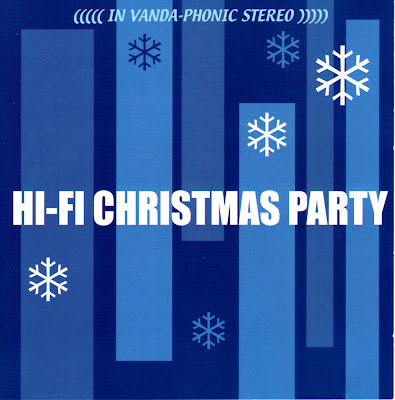 Musician-journalist Dan Pavelich did a Facebook post yesterday announcing the release of Hi-Fi Christmas Volume 3. Proceeds from the CD will benefit the Blood Center in Milwaukee. Volume 3 finds many of the power pop musicians who participated in the past returning to help out again. It should be available on retail sites soon. In the meantime, here's a repost of a review I did of the original, Hi-Fi Christmas Party.

Released in 2002, Hi-Fi Christmas Party was put together by vocalist-bassist Dan Pavelich of the Chicago-based power pop band The Bradburys to help fund research for Von Willibrand’s disease, a bleeding disorder that had stricken his daughter. This easy-going holiday compilation includes contributions from several local and national power pop acts. It’s another example of how often musicians come together for charitable causes, particularly around this time of year.

Pavelich is equal parts philanthropist and musician here, leading The Bradburys through the romantic and highly energetic “I Love It When It Snows!” The Jellybricks use a 1960s style arrangement on “We’ll Be Together,” their tale of a guy traveling on the holidays to be reunited with his girlfriend. On the bluesy “Christmas Is Saturday,” noted producer-performer Don Dixon is also eager to get together with his gal, and he brings an full choir along with him. On the high-speed “It’s Christmas And I’m Going Home,” Rob P. & The Q’s depict a city-dweller who needs to visit his old home town in order to find peace during the holidays.

Jim Babjak’s Buzzed Meg is pretty much The Smithereens without singer Pat DiNizio. The catchy “Christmas Morning” sports Babjak’s signature guitar playing, and he does a solid job on lead vocals. A different version of this song, sung by DiNizio, can be found on the very fun CD, Christmas With The Smithereens. “Christmas Morning,” as well as Andre Perry’s funny “Fat Aunt Bette” and Glowfriends’ spiritual “Joy Of Christmas” also appear on Ho Ho Spice, the 2-CD Hospice Awareness and Benefit Project.

Phil Angotti, whose band The Idea contributed one of the better songs on Yuletunes, goes the acoustic route with “Getting Home (for Christmas).” This light tune cleverly mixes references to the three wise men, It’s A Wonderful Life, and A Christmas Carol. The Ted Ansani Trio finds the Material Issue drummer playing drums, bass, and vibes on the breezy, lounge style instrumental, “The Kriss Kringle Jingle.” Lisa Mychols brings back the girl group sound of the early 1960s with her “Listen To The Bells Ring” while October Elsewhere evoke The Kinks on their melodic “Christmas Every Day.”

Other contributors to the highly worthwhile Hi-Fi Christmas Party include The Spongetones, The Lolas, Bill Lloyd, Jeremy, John McMullan, Dom Mariani, and Cool King Chris, which includes Jamie Hoover of The Spongetones.