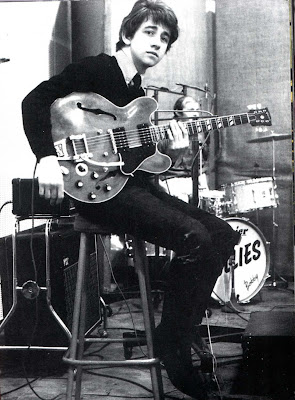 The Hollies Through The Ages Volume One.

You Say It's His Birthday. Best wishes to Tony Hicks on his birthday. Tony has served as lead guitarist and harmony vocalist for The Hollies for almost the entire 50 years (in 2112) the band has been around. He’s the bloke who came up with the idea for “Stop Stop Stop,” the 1966 hit single that features his distinctive banjo playing. Once again, I highly recommend the recently released DVD Look Through Any Window The Hollies 1962 - 1975. Tony, along with Graham Nash, Allan Clarke, and Bobby Elliott, provides running commentary throughout this entertaining documentary, and demonstrates some of the more interesting riffs he’s played over the years.

No Cover For Covers. There’ll be no admission fee when The Beatle Brothers perform at the Countryside Saloon tonight. The group has been covering the fab four and other 1960s bands for 25 years. Countryside Saloon is located at 2501 Ballard Road in Des Plaines. Show time is 9:00 PM.

Wonder If Julianna Hatfield Knows About This. The Del Fuegos, the critically acclaimed 1980s garage rock band who were mentioned in Hatfield’s “My Sister,” have a brief reunion tour coming up next year. It kicks off on February 22nd in Boston, and includes gigs in New York, Cleveland, Minneapolis, Milwaukee, and St. Louis. They have a date at Lincoln Hall in Chicago on February 25th. It would be great to hear some of those classic tracks like “Nervous And Shakey,” “Backseat Nothing,” and “Mary Don’t Change” performed live.

The Beat Is Back. Another guitar-driven band that got its start a few decades ago, The Paul Collins Beat, is coming back to Chicago with a gig at Ultra Lounge on Milwaukee Avenue on February 3rd. Collins has been on a roll since releasing one of the better power pop CDs of 2010 with King Of Power Pop.

Pants On Fyre. Happening Magazine, an offshoot of the groovy neo-1960s publication, Shindig, reported in a recent email that another legendary garage rock band, The Lyres have resurfaced in London. The Boston-based group that gave us classics like “I Want Help You Ann” as well as a letter-perfect cover of The New Colony Six nugget, “I Confess,” is on a European tour that takes them to the 93 Feet East club on February 13th. Prior to that, they’ll be playing gigs in Italy.

It’s Beginning To Rock A Lot Like Christmas. The syndicated radio show Underground Garage is always worth checking out, but it’s even more fun when host Little Steven Van Zandt unpacks all his favorite holiday songs on the annual Christmas Special. Not sure if this year's party will be a two-part event, as it has been in the past. Underground Garage airs on WXRT each Sunday from 9:00 PM to 11:00 PM.

Mania And Monroes. The Melismatics, the Minneapolis-based alt rock band that has its next CD, Mania, coming out on Pravda Records in January, just announced on Facebook that it’s also working on a CD with Tony Ortiz, the former singer of The Monroes. “Missing Man,” a song from the collaboration is up on YouTube and sounds pretty intriguing.

Let’s Paint Their Smiles On Upside Down. The New Jersey band Mike Daly and The Planets has created a theme song for those of us who have never liked Bozo or any of his ilk. I’ve been afraid of them (clowns, not Mike Daly and The Planets) since I saw a TV show as a child where some guy was haunted by a ghost clown. “Kill A Clown (No, Not Really),” has a catchy, guitar-driven arrangement reminiscent of Webb Wilder or possibly ZZ Top, along with some exuberant backup vocals. It’s filled with funny lyrics about offing people with fake red noses like, “I killed a clown in Kalamazoo/Made him choke on his own kazoo” and “Killed them clowns in Zanzibar/Ran them off the road in that tiny car.” The single is available as a digital download at the band’s website, Amazon, CDBaby, and iTunes.

I should mention that Frank Carr from my former comedy group Famous In The Future, did a similar song/skit a number of years ago. Now that's someone who really hates clowns.

Heart's In The Right Place. Heart may not have been inducted into the Rock And Roll Hall Of Fame this year, but at least the South By Southwest Music and Media Conference and Festival is giving the Wilson sisters some props. Ann and Nancy will be featured speakers on March 15th at the Austin Convention Center, and they’ll also be performing with Heart at a TBA venue at the event.

Tears On My TARDIS. Even though it was inevitable given the show’s rotating cast format, I was still sad when The Nerdist website reported yesterday that companions Rory and Amy will be leaving Doctor Who in the coming season. I didn’t immediately warm up to actress Karen Gillian as Amy Pond, but it wasn’t too long before she was exuding the spunk and sexiness that are the hallmarks of The Doctor’s female companions. Arthur Darvill, who portrayed Amy’s husband Rory, is a likable and supportive guy that a lot of male viewers probably identify with. Here’s hoping Gillian and Darvill continue to appear at Doctor Who conventions and promotions, because it seems like they have great rapport with the series’ current lead actor, Matt Smith.

Songs Sung (About A) Blue Police Box. On a related note, Chicago Tribune writer Christopher Borrelli had an article in yesterday’s edition about Niles North High School student Allegra Rosenberg. She’s been making a name for herself by writing songs about Doctor Who episodes and posting them on her YouTube Channel, Stop! It’s Ginger Time! Noted author Neil Gaiman and BBC America executive Matt Stein are among her fans.

Index: Doctor Who, The Hollies