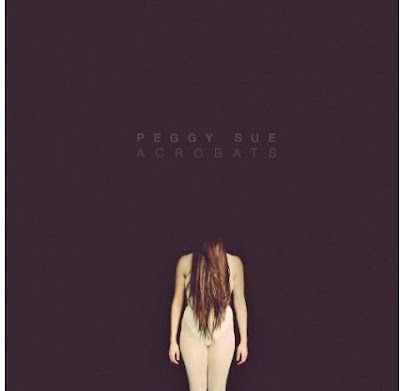 The deceptively named English trio Peggy Sue continues to delve into the dark and mysterious on its sophomore effort, Acrobats although with a more amplified sound than on its 2010 debut, Fossils and Other Phantoms. Vocalists-guitarists Katy and Rosa (the band members go by first name only) weave harmonies throughout ominous but melodic arrangements, much like the female quartet Warpaint, while Olly adds dramatic drums and percussion. The lyrics can be murky and cryptic, but most seem to deal with power struggles within relationships.

The woman portrayed in the hypnotic “Song & Dance” laments “But he gave me nothing he did not want back,” while “Cut My Teeth” views a first romance as a learning experience. Peggy Sue taps into traditional English music on “Funeral Beat,” while the energetic “D.U.M.B.O.” feels more like a live folk rock performance. Melancholy strings augment lines like, “Come away from the window, I’m afraid of what you’ll see” on “Shadows,” but the most harrowing moments come on the final track, “There Always Was.” “There’s trouble in my blood,” the song’s protagonist notes over a tribal drum beat. “There always was.”