Let’s Go Out To The Abbie 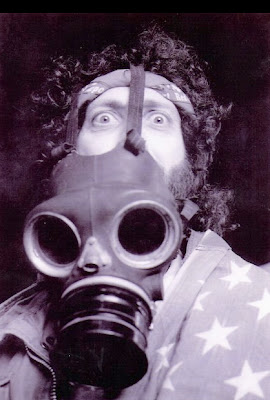 Abbie Hoffman Died For Our Sins XXIII, a virtually nonstop celebration of theater, performance art, and comedy, comes to the Mary-Arrchie Theatre this weekend. I first heard of Abbie Fest, as it's more commonly known, back in 1989 via a classified ad placed by the Mary-Arrchie in The Chicago Reader. The theatre was looking for performers to take part in a 20th anniversary celebration of the original Woodstock Festival. Having just formed the Famous In The Future comedy group with Lake Sirmon, Frank Carr, and Dave Drazin earlier that year, I jumped at the opportunity.

By the time the festival arrived, our den mother Sirmon had moved to another state. We soldiered on with new cast members and did a revue of comedy skits that was haphazard at best. But we loved the camaraderie among the performers, thought Mary-Arrchie Artistic Director Rich Cotovsky was a cool dude, and happily signed on for Abbie Fest II when it rolled around in 1990. Famous In The Future returned every year after that, growing more polished in our writing and performing. I left the group in 2009, but still never miss an Abbie Fest.

Abbie Hoffman Died For Our Sins carries on the Mary-Arrchie’s mission of establishing a spirit of cooperation among Chicago’s theater community, as well as giving new groups a chance to reach a larger audience. There’s a definite party atmosphere on Friday and Saturday nights, but be sure to also check out the fest during the less hectic hours, because there’s usually something interesting going on. Tickets are $10 for a single day, $25 for the weekend.

Here are the performances for Friday, August 19th. I added comments for the acts that I've seen in the past. As far as I know, this is the latest schedule released by the Mary-Arrchie. Changes have been made (note the new day for A Red Orchid Theatre) and there are still a fair amount of TBAs. Hopefully, that means even more acts will be joining in the festivities. Mary-Arrchie Theatre is located at 735 W. Sheridan Road. Call 773-871-0442 for additional information or check out the website.

Mary-Arrchie Artistic Director Richard Cotovsky has always insisted the rally and march are essential elements of the festival’s counter-culture vibe. Free spirits who enjoy a long walk are welcome to throw on some vintage hippie threads and join in the fun.

7:00 p.m. Opening Ceremonies featuring Richard Cotovsky as Abbie Hoffman Cotovsky has been impersonating the late Yippie founder for over 20 years and always gets the festival off to a rousing start. Half the fun is watching the audience react to his rants and comic observations on the current political landscape.

8:00 p.m. Diary of a Madman by Nikolai Gogol - Rush Pearson One of the must-see productions at this festival. Pearson can be both heartbreaking and hilarious as he chronicles the dementia of a 19th Century Russian civil servant, in Gogol’s critically acclaimed one-man play.

9:00 p.m. Buckminster Fuller Has A Gun! by Nick Hart - Giggling Pyramid Theatre Second play by Nick Hart on this evening.

9:30 p.m. MooseHumps 2.0 - A Choose Your Own Adventure Halloween Play by R. Alex Kliner and Bobby Libby - Lights Out Theatre Company

10:40 p.m. Gas Mask 101 by Arlene Cook - Mary-Arrchie Theatre Co. An Abbie Fest perennial, this comedy about Southern Illinois University students in the Viet Nam era has plenty of laughs, but some poignant moments as well. Cotovsky always nails the role of Swami, the perpetually pot-smoking professional student, while the rest of the cast changes each year.

1:00 a.m. The Pleasures of Dining Alone by Maggie O’Keefe - Tiger Lips and Rice4Dayz

2:10 a.m. Wild Dogs by Matt Borczon - Mary-Arrchie Theatre Co. This drama/comedy is another showcase for Cotovsky’s in-your-face acting style. A deranged loner and an uptight businessman who was recently thrown out by his wife become uneasy allies after a bout of heavy drinking and fighting.