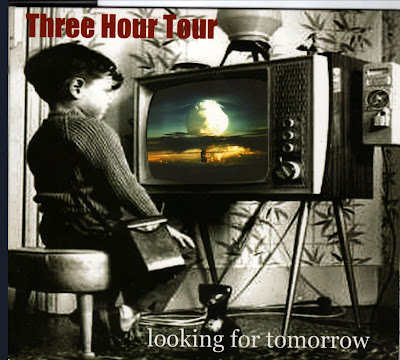 Released in 2010, Looking For Tomorrow was the fourth effort from singer-guitarist Darren Cooper and his rotating corps of noted indie rock and power pop musicians. This time out, Three Hour Tour was mostly Cooper and bassist-keyboards player Adam Schmitt, with John Richardson and Brad Elvis almost evenly splitting time on drums. Paul Chastain plays bass on one of the tracks. As usual, Cooper did the bulk of the songwriting.

Looking For Tomorrow has the feel of classic power pop, but also brings to mind some of the better crafted albums of the mid-1960s. Cooper prefers to pen cryptic lyrics rather than offer the usual boy-meets-girl sentiments, but his melodies are positively alluring. The energetic tracks, like “For Now We Say Goodnight,” “All Time Low,” and “Dead Reckoning” are the most impressive, but Three Hour Tour also succeeds with mid-tempo material and the acoustic-based, and slightly optimistic title track. A thundering take on the obscure Who song, “Heaven And Hell” opens with Brad Elvis channeling Keith Moon while Cooper does a great job delivering John Entwistle’s apocalyptic lyrics.