You Be Me For Awhile - Halloweekend 2012 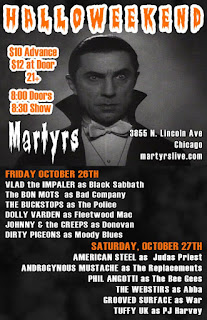 Each year, I await the arrival of certain events in the Chicago area with the eagerness of a child counting the days until Christmas. International Pop Overthrow in April; Entertainment Expo (C2E2) in April; Chicago Comic Con Wizard World in August; Fest For Beatles Fans in August; and Halloweekend in October. It might seem early to be making plans for the end of the month, but considering the usual flood of Halloween festivities, it’s a good idea to know your options.

Halloweekend, a two-night festival of local talent performing as famous bands, returns for its 9th year on Friday, October 26th and Saturday, October 27th. Friday’s lineup features Vlad The Impaler as Black Sabbath, The Bon Mots as Bad Company, The BuckStops as The Police, Dolly Varden as Fleetwood Mac, Johnny C & The Creeps as Donovan, and Dirty Pigeons as The Moody Blues. On Saturday, American Steel performs as Judas Priest, Androgynous Mustache as The Replacements, Phil Angotti as The Bee Gees, The Webstirs as Abba, Grooved Surface (or The Delafields, depending on which website you pick) as War, and Tuffy UK as PJ Harvey. Each set is comprised of about four or five songs.

If some of those names sound unfamiliar, even to regulars on the Chicago scene, it could be due to musicians coming together under a goofy name for a one-off performance. Looking at the schedule, several sets sound promising. Phil Angotti always does a bang-up job on whoever he’s covering, and he’s done Bee Gees tributes before. Dolly Varden is one of Chicago’s most critically acclaimed bands, and it should be fascinating to see them interpret Fleetwood Mac. The Webstirs did such a fabulous job recreating Chicago (complete with a horn section) last year, I’m eager to check them out again, even though I’m not that much of an Abba fan. Plus, they’ve had the good sense to enlist singer-guitarist Holly Senchak, who wowed the audience with her Courtney Love impression in 2011, and came back later that same night to wail as a backup singer during Ron Aselin’s Rolling Stones tribute. Bon Mots are another local band with a solid history, and Bad Company will provide them with a wealth of choices. Andogynous Mustache are veterans of this fest, who are highly likely to bring The Replacements to life.

I’m not familiar with The BuckStops, Johnny and The Creeps, or Dirty Pigeons, but I’d enjoy hearing the music of The Police, Donovan, and The Moody Blues, respectively. Tuffy UK portrayed Patti Smith last year, but I didn’t catch the power pop duo’s set. But part of the fun is discovering how each band approaches its tribute. Some are fairly straight forward, while others, like when Penthouse Sweets did The Sex Pistols a few years back, are hilariously in character.

Note: Halloweekend has moved from its usual haunts at the Abbey Pub to Martyrs this year. The music starts at 8:30 each night, admission is $12 at the door, $10 in advance. The Abbey Pub also has some tribute band fun cooked up for that same weekend, with acts portraying Daft Punk, Michael Jackson, The Grateful Dead, White Stripes, Dave Matthews Band, and Fiona Apple.

And here’s some more competition for the Halloween weekend. The New Invaders, a very capable band that covers a wealth of 1960s music, including The Hollies, have a gig at The Blues Bar in Mount Prospect, on Friday, October 26th.
Posted by Terry Flamm at 9:52 PM