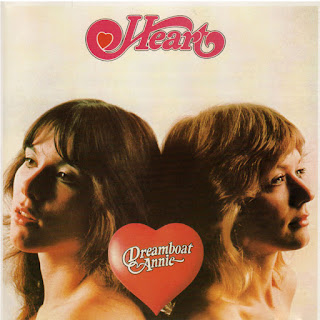 Earlier today, I posted a review of the new book by Ann and Nancy Wilson, Kicking And Dreaming, which revealed that “Magic Man” was inspired by Ann Wilson's boyfriend at the time, Michael Fisher. Here's a Halloween post I did about “Magic Man” back in 2009. By the way, there’s a demo version of this song on the Strange Euphoria box set that has a spookier, stripped down arrangement.

When Heart released its debut, Dreamboat Annie back in 1976, Ann and Nancy Wilson often dressed like they’d borrowed their wardrobe from a medieval sorceress. Maybe it was all those nights of covering Led Zeppelin during their bar band days. Their instant FM radio classic, “Magic Man,” describes a young woman’s dream-like encounter on a “cold gray night so long ago” with the blue-eyed mysterious title character, who promises to whisk her off to exotic adventures.

Although apprehensive, she feels like she already knows him, and when he offers to “cast my spell of love on you,” she’s hooked. The song, which includes an extended guitar and synthesizer jam, as well as Ann’s impressive vocals, doesn’t mention any tragic consequences, so maybe the woman was right not to heed her mother’s misgivings.
Posted by Terry Flamm at 11:27 PM