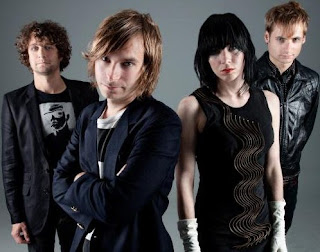 Here’s hoping everyone has a fun and safe pre-Halloween weekend of celebrating.

Martyrs’ on Lincoln Avenue is the site for this year’s Halloweekend, a two-night festival of local talent performing as famous bands. Friday’s lineup features Vlad The Impaler as Black Sabbath, The Bon Mots as Bad Company, The BuckStops as The Police, Dolly Varden as Fleetwood Mac, Johnny C & The Creeps as Donovan, and Dirty Pigeons as The Moody Blues.

On Saturday, American Steel performs as Judas Priest, Androgynous Mustache as The Replacements, Phil Angotti as The Bee Gees, The Webstirs as Abba, Grooved Surface (or The Delafields, depending on which website you pick) as War, and Tuffy UK as PJ Harvey. Each set is comprised of about four or five songs.

The New Invaders will be performing an extensive variety of hits from 1960s at The Blues Bar in Mount Prospect tonight. The band has a number of solid singers, and a repertoire that changes from gig to gig. Hopefully tonight’s show will include some covers of The Hollies.

Elgin is once again holding its wildly ambitious Nightmare On Chicago Street. Local officials, musicians, filmmakers, actors, and businesses have joined forces in a zombie-themed festival being staged this Saturday night in the suburb’s downtown area.

Elgin resident and artist Dave Metzger, working with Jeff Kelley, host/creator of the Sunday Morning Coffee With Jeff Internet show, has filmed new zombie bits to add to the ones he created in 2011. I was invited to portray a hot-headed politician in a parody of a debate show. The comedy clips will be shown on TVs set up in various locations in Elgin. For the full schedule, check out the Nightmare On Chicago Street website.

Next Wednesday, on the actual Halloween night, Durty Nellie’s in Palatine will present Halloween Madness. Described as Bands In Musical Disguise, it aims to mix customers in costumes with local musicians pretending to be famous ones. The emphasis is on alternative rock, as August Premier will perform as Alkaline Trio; Farraday covers Blink 182; Slam Dunk Music Co. takes on Weezer; Circus Bear portrays The Black Keys; and The American Autumn will be Rancid.There will also be a costume contest. Doors open at 7:30 PM, admission for the 21 and older show is $10.00

In other entertainment news:

The Melismatics recently recorded a a video for “Divided Devotions” from their Mania CD. While not as eye-popping as their previous clip, “Your Love Is A Poison,” it’s very well made and features a guest appearance from Jon Auer of The Posies. Auer produced a number of of the tracks on Mania and contributed back-up vocals on six songs.

I was streaming the “Secret Weapon” show on Woody Radio while putting this week’s Slumgullion together. “Secret Weapon” always serves up an entertaining mix of catchy, guitar-driven tunes, with loads of new discoveries for even the most avid powerpop fanatic. Be sure to have a pen and paper handy while listening to jot down the songs and artists you’ll want to investigate further.

The Braam Brothers have a new CD called Hail Violet coming out soon. The Chicago area band has created a video for “Be Bop Life,” one of the songs on the CD. It’s an acoustic-based, melodic track that features a guest performance by Brad Elvis on drums.

The Songwriter’s Square show on November 18th at The Lyric Hyperion Theatre And Cafe in Los Angeles will offer a rare opportunity to see Bangles drummer Debbi Peterson in a solo performance. She’ll be sharing the bill in an intimate setting with John Wicks of The Records and singer-songwriter Gene Siegel. Musician/comedian Bill Berry will serve as host. Hopefully, Peterson will do “Some Dreams Come True,” a song she wrote with Walter Ingleheart for the Everything CD, and still stands as one of The Bangles’ best. Tickets are $15.
Posted by Terry Flamm at 6:55 AM