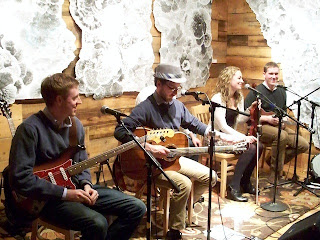 Note: These reviews originally appeared in the “Around Hears” column in the Illinois Entertainer.

Wells-Next-The-Sea  is an English-sounding name, but the band is Chicago bred and creates homespun indie rock songs on Passenger Side. Vocalist-guitarist Dann Morr is the only remaining member from 2010’s Guest House, but has a strong rapport with the new recruits. He shares harmony vocals with fiddle player-vocalist Liz Barnett on the acoustic “With Our Eyes Closed.” Barnett also has a duet with singer-ukulele player Brennan Mackey on the funny barroom romance, “No One Knows You Like I Do.” Wells-Next-The-Sea has an upcoming gig at Township, at 2200 N. California in Chicago, on November 4th.

The musical tales on Tom Irwin’s latest CD, Sangamon Songs spring from an 1893 diary of a teenage boy named Harry Glen Ludlam. Irwin fleshes out Ludlam’s entries on shucking corn and going to the *Chicago World’s Fair* with a folksy vocal style and homespun arrangements. The peppier songs, like the picturesque “Walking In The Woods” and “The Footsteps Of My Maker” work best, although most of Sangamon Songs is entertaining look back at a simpler time.

The Paver is pretty much on target in describing the exotic swirl of classical, punk, and heavy metal on its five-song EP, Bad News, as ‘Baroque-Core.’ “Why” evokes a parade of witches, via ghastly screaming, strings and a stomping beat, while “Leaves And Rust” is a frantically-paced nightmare. The somber “Everyone Knows You’re A Bore” borrows some of its melody from Steve Goodman’s “Lincoln Park Pirates” while “Hush” harks back to the days of Chicago’s nascent punk scene.
Posted by Terry Flamm at 6:22 PM