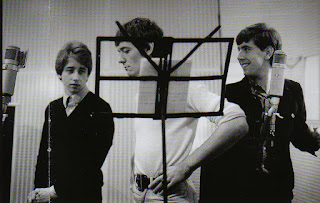 The Hollies are currently celebrating their 50th Anniversary. Drummer Bobby Elliott and guitarist Tony Hicks are the only original members still performing with the band, but they’ve been touring with the current members for several years. Judging from the reviews in the UK press, The Hollies are still a highly-polished, professional act. Here’s a review I originally did for the Illinois Entertainer of their Radio Fun compilation.

The Hollies have released a variety of compilations over the years, but Radio Fun is the first to tap into material they performed live on BBC programs like Saturday Club and Top Gear from 1964 through 1968. Drummer and unofficial band historian Bobby Elliott’s liner notes provide interesting background info, explaining that the occasional guitar intro is missing because, “Either there was a disc jockey blathering or someone has tinkered with our work and chopped out an important part of the track.” Still, the 32 songs on Radio Fun offer interesting takes on one of the British Invasion’s more enduring acts.

The hit singles are far outnumbered by LP tracks, as this collection illustrates how often The Hollies, like most of their U.K. contemporaries, covered and drew inspiration from American R&B music. The original “Put Yourself In My Place” dovetails nicely with a version of Curtis Mayfield’s “You Must Believe Me,” and The Hollies romp through “Little Bitty Pretty One” and “Lawdy Miss Clawdy.” “Bus Stop” features more of a twangy guitar sound, and the lesser-known “Wings” has entirely different lyrics than the version that appeared on previous collections.
Posted by Terry Flamm at 8:56 PM