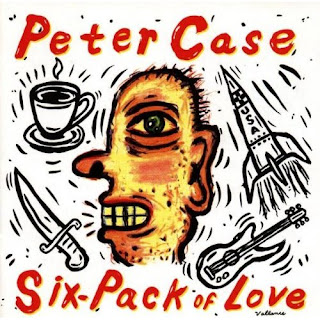 Note: This review originally appeared in the August 1992 issue of the Illinois Entertainer. The issue featured J. Kevin Unsell’s cover story on Ministry, along with Dag Juhlin’s article on XTC, and Penelope Biker's profiles on locals bands Catherine and Charming Beggars. I reviewed this impressive new release from Peter Case.

Peter Case has a classic rock and roll voice that served him well with The Nerves, a trio that was well ahead of its time in the mid-1970s, and also with The Plimsouls, which he formed a few years later. Six Pack Of Love, his third solo effort, and the first with a full band backing him, marks a return to a more electrified type of pop. In fact, “It’s All Mine” is similar in spirit and melody to the rambunctious “Magic Touch” from The Plimsouls’ classic Everywhere At Once LP.

On “When You Don’t Come,” Case’s guitar sounds like a buzz saw slashing through timber while his vocals convey the bitterness of waiting for a girlfriend who never arrives. “Vanishing Act,” written with Tonio K, covers similar ground, while Case’s collaboration with Billy Swan, “I've Been Looking For You” would fit right in on a vintage Hollies album. The harder-edged material on Six Pack Of Love is balanced by a few ballads, including the hauntingly beautiful “Last Time I Looked.”