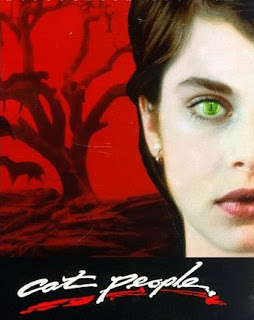 Few songs have made a more eerie entrance than “Cat People (Putting Out Fire),” the theme from director Paul Schrader’s 1982 horror film, Cat People. After a slow drum beat and a swirl of synthesizers, David Bowie emerges, singing, “See these eyes so green/I can stare for a thousand years.” His voice is so dark and deep you have no trouble believing him, and when he adds, “I’ve been putting out fire with gasoline,” you know there’s danger afoot.

Set to a guitar-driven arrangement crafted by veteran film composer Giorgio Moroder (Flashdance, Midnight Express) Bowie’s lyrics evoke the doomed characters from the movie. Irena and her brother Paul, played by Natassia Kinski and Malcolm McDowell respectively, are descendants of humans who mated with leopards. This causes them to turn into panthers whenever they have sex with people, and they can’t return to their human forms without killing somebody. Bowie has created several of his own fascinating characters through his music over the years, and he’s just as adept in conveying Irena and Paul’s tortured emotions. “Still this pulsing night/A plague I call a heartbeat/Just be still with me/Ya wouldn’t believe what I’ve been through.”

The movie Cat People successfully tapped into the superstitions we’ve had about felines for centuries. Even today, it’s a good idea to make sure black house cats are kept indoors on Halloween to prevent deranged people from hurting them. And steer clear of panthers as well.
Posted by Terry Flamm at 8:35 PM

Yes, I agree, totally cool song from David Bowie and Gorigio Morodor... it had a big impact when it came out... and avoiding panthers or large cats with sharp nails is probably good advice!