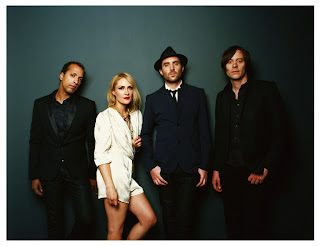 Sometimes it’s not enough for a band with Metric’s cutting edge reputation to put together a new batch of well-made songs. Fans who complained that Metric’s 2009 release, Fantasies, veered into overly commercial material will likely raise the same issue with the relentlessly catchy Synthetica. Still, it’s nearly impossible to resist the combination of these energetic arrangements and the seductive vocals of lead singer Emily Haines.

“Lost Kitten” could almost be called lilting, as it skips along to synth beats, but references to cover-ups, cocaine, and high fashion add a darker element. The troubling “Dreams So Real” takes the point of view of a rock superstar, who after crying out against injustice wonders, “Have I ever really helped anybody but myself?” Haines opens the pulsating title track by declaring “Some of us are wild ones,” and on the defiant “Artificial Nocturne,” plays a woman who finds freedom in letting everyone think she’s crazy. As long as Metric continues to explore the more unsettling aspects of society, they’ll never be guilty of selling out.
Posted by Terry Flamm at 10:18 PM