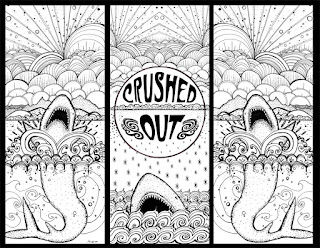 I spent four days in San Diego last week, which kept me from writing my usual Wednesday through Friday blogs. I had high hopes of posting while on the road, but it just didn’t happen. I wish I could say I hit all the best rock clubs in San Diego, but this was more of a family-oriented get-together, and I spent a good deal of time out of the city proper. But I did pick up copies of the San Diego Reader and San Diego City Beat to add to my collection of alternative free papers, and had pizza while listening to classic at the Yard House restaurant.

Hopefully, things at BHT will be back on a regular schedule again. Here’s a sort of Slumgullion column to get the ball rolling.

Look for Crushed Out to perform some guitar-fueled garage/blues rock at its gig this Friday night, October 26th,  at Reggie’s Rock Club in Chicago’s south Loop. The Brooklyn-based duo of vocalist-guitarist Frank Hoier and drummer Moselle Spiller, formerly known as Boom Chick, has a full-length debut, Want To Give, coming out  on November 6th. “Crown Of Wildflowers” has an early Rolling Stones feel, while “Nailgun” is a high-speed surf/punk instrumental.

I Did Not Know That. According to drummer Brad Elvis (now with The Handcuffs and The Romantics), his earlier group, The Elvis Brothers once covered George Harrison’s “If Not For You.” This, according to Brad’s post on the Elvis Brothers Facebook Fan page. He notes that the trio probably only performed the Dylanesque tune once or twice on the Champaign, IL club scene. Considering the Elvis Brothers’ fun, revved-up style, that would have been fun to hear.

Shoes fans can find the first installment of an in-depth interview with vocalist-bass player John Murphy  on the Musoscribe blog, as well as an interview with all three members (John, Jeff Murphy, and Gary Klebe) on the It’s Psychedelic Baby blog.

Aaron Fox And The Reliables a Chicago-based band with a real knack for that Midwestern power pop sound, returns to Uncommon Ground’s Devon location for a 10:00 PM show on Sunday, November 4th. The group has an impressive trio of new songs, some of which were previewed at International Pop Overthrow Chicago earlier this year, on its website.

The Columbia College Chicago Theatre Department will be performing City On The Make from October 24th through November 3rd at the Classic Studio Theatre, located at 72 E. 11th Street in Chicago. The jazz-infused musical was inspired by the critically-acclaimed writing of Nelson Algren.

The Second Disc online newsletter is reporting that Rhino will re-release Nuggets: Original Artyfacts from the First Psychedelic Era, 1965-1968 on November 13th. The recently remastered version of this  highly influential collection of garage rock tunes, much beloved and publicized by Little Steven Van Zandt his syndicated Underground Radio program, is going to be available as a double LP and as a CD.
Posted by Terry Flamm at 10:01 PM