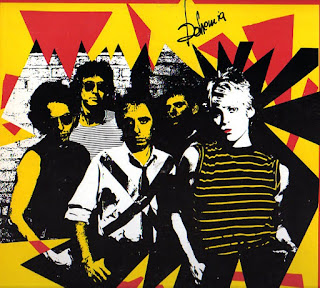 Back in the early 1980s, Bohemia’s high energy assault, led by charismatic lead vocalist/keyboards player Carla Evonne, prompted a Chicago daily newspaper critic to proclaim that Bohemia was every bit as good as X from Los Angeles. Following the 1980 release of a self-titled, three-song 10 inch EP in 1980, Bohemia struck again a year later with their cutting edge debut LP, Deviations. The album’s title served to foreshadow an obsession with disturbing subject matter on songs like “Plastic Doll,” “Standard Deviations,” “Empty Room,” and “Dr. Werner.”

“Hydrogenic” was dark in a fun, highly melodic way. A punk rock masterpiece that offers a girl meets mutant love story with an underlying jab at nuclear energy, “Hydrogenic” kicks off with Zirbel’s revved up bass playing within an extended instrumental intro. Evonne sets the romantic tale in motion, singing, “Since I met you baby/I haven’t been the same/You hit me like an H-bomb and now I hardly know my name.”

Her lover’s appearance has been drastically changed by exposure to massive doses of radiation. “Momma says you’re different/With your long green hair/You got webs between your fingers/But I don’t even care.” As the music zips along, Evonne continues to sing the praises of her unique beau: “I can see you glowing in the dark/In my life you really caused a spark.” The satirical lyrics are punctuated by an overjoyed chorus of, “Ooh, our love is new/Our love is new . . . nuclear.” Sadly, none of Bohemia’s work is available on CD, but you can check out a few of its live performances on YouTube.
Posted by Terry Flamm at 10:55 PM