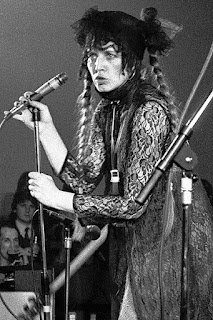 Photo from Wikipedia and the Lene Lovich Facebook page.

The arrival of new wave and punk rock in the late 1970s introduced an exciting cast of talented and sometimes intimidating female performers, such as Chrissie Hynde, Deborah Harry, Annie Lennox, Siouxsie Sioux, and Nina Hagen. In 1979, Lene Lovich, a singer with a passion for bizarre outfits and even more bizarre hair, released the frightening “Bird Song” as a single on Stiff Records. While the lyrics don’t mention anything too diabolical, Lovich’s high-pitched warble, the song’s gothic arrangement, and an ominous-sounding male choir create a nightmarish ambience. All the while remaining catchy enough for the dance floor.

Basically, this is a dark twist on the old expression, “A little bird told me,” in which a scheming feathered creature steals a woman’s boyfriend by tricking her into thinking he’s been untrue. “So with the bird, one day, you flew away/I woke up too late, you had gone/Fading on . . . with this song/Of the hurting little bird.” Lovich delivers these lines, and others like, “Such a cold bird, so hard, captured your heart/Does it matter I am falling apart” with a Nora Desmond like intensity. Later, she mentions the flesh “Of the dead little bird,” but it’s unclear whether she killed it. The whole avian thing seems to be a metaphor until you see the startling rock video Lovich created for “Bird Song,” which is executed in the style of a vintage European horror flick.

She plays a runaway bride, leaving her guy at the altar while she runs outside to challenge a raven to a staring contest. The male chorus becomes a group of priests or deacons, one of whom pounds away at the pipe organ like Lon Chaney. Maybe Lovich did lose out to an actual bird. “Still I watch the sky/Still I wonder why/Still I hope that I can carry on.”  Regardless of whether the villain is animal or human, Lene Lovich’s “Bird Song” record and video are genuine Halloween classics.