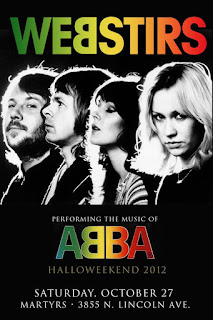 The ninth annual Halloweekend, held this past Friday and Saturday at Martyrs’ in Chicago, offered 12 bands masquerading as some of rock and roll’s biggest stars. I’ve yet to make both nights of this fun and imaginative festival, usually due to prior commitments. Being staged at one of the most festive times of the year results in a lot of competition, but this tribute band concept seems so well suited to Halloween, it’s hard to imagine its organizers changing the date. Still, I regret missing Friday’s lineup, especially with local acts covering Bad Company, Fleetwood Mac, Moody Blues, Police, and Donovan.

Saturday night was packed with entertaining performances, although the limits of public transportation kept me from seeing the last set, which was American Steel as Judas Priest. While taking the Number 80 Irving Park bus to Martyrs’, I encountered some people on their way to a Doctor Who-themed party. The young woman’s Weeping Angel costume was particularly well done, and the gentleman I spoke to was done up as a David Tennant version of The Doctor. Just one of the many fun things going on that night.

I’ve been to Martyrs’ on a few occasions in the past, but I don’t remember it being as dark as it was for Halloween. Sitting beneath a blacklight caused my index cards to glow, which made it easier to jot down notes. A red neon sign that read, Live From Hell and a multi-colored neon devil were hung by the stage, where a fog machine added a spooky ambience throughout the night. Each set lasted about 30 minutes.

Tuffy UK opened Saturday night’s event with an authentic tribute to PJ Harvey. The band must have a thing for eccentric female vocalists, because it covered Patti Smith at last year’s Halloweekend. Tuffy UK’s lead vocalist did a good job channeling Harvey’s evocative voice on songs like “You Said Something,” and affected a believable British accent while talking to the crowd.

Grooved Surface followed with a selection of some of War’s better known material. The band’s lead vocalist was better at the more talky songs like War’s initial hit with Eric Burdon, “Spill The Wine” and their later, politically charged “Why Can’t We Be Friends.” He strained a bit on the more melodic “Summer,” but the talented cast of musicians behind him kept things lively on “Cisco Kid” and “Low Rider.”

Even those of us who aren’t big ABBA fans had reasons to look forward to The Webstirs’ take on the Swedish band’s relentlessly catchy hit singles. The Webstirs are a veteran power pop band with expertise in crafting strong melodies, and their tribute (complete with guest horn players) to the band Chicago at the 2011 Halloweekend nearly brought the house down. Plus, this year, they asked singer Holly Senchak from the band Metropolly to join them. Just as Senchak nailed the corrosive Courtney Love when Metropolly performed Hole songs last year, she evoked a sunny disposition on ABBA tunes like “S.O.S.” and “Waterloo’ by dancing and spinning to the music. She has a powerful voice and her harmonies with the members of The Webstirs were first rate.

Singer-guitarist Phil Angotti has found success with his own compositions, and is an expert mimic of famous musicians. He’s done tribute shows of Squeeze, The Beatles, The Rolling Stones, and Paul McCartney and Wings. The Bee Gees are one of his favorite artists to cover, and that showed  during his set at Martyrs’. Harmonizing with guitarist-vocalist Ellis Clark from The Handcuffs and singer Casey McDonough, Angotti recreated the baroque pop of vintage Bee Gee songs like “Massachusetts” and “To Love Somebody.” It’s to the band’s credit that they risked performing the somber “New York Mining Disaster 1941” in such a party atmosphere, and it was a nice reflection on an audience that fully appreciated it. “Lonely Days” and “How Can You Mend A Broken Heart?” were also highlights. I would have preferred to hear “My Own Time” or something from Odessa rather than “Jive Talking,” but you can’t fault Angotti for wanting to include later Bee Gees’ material in his set.

Androgynous Mustache then changed the mood entirely by ripping through a set of punk/pop classics by The Replacements. Their lead vocalist-guitarist made for a very believable Paul Westerberg on songs like “Little Mascara” and “Alex Chilton,” while the other band members careened wildly behind him. The between-songs banter was humorously raucous, and for a while it looked like they might recreate The Replacements’ infamous onstage breakup at Taste Of Chicago. The guys in Androgynous Mustache have done a lot of these type of tribute shows, and they exuded high energy as well as professionalism in their Halloweekend gig.

As noted earlier, I had to leave before American Steel came on as Judas Priest, who I’m sure added another interesting shade to the impressive variety of music at this year’s Halloweekend.
Posted by Terry Flamm at 9:31 PM