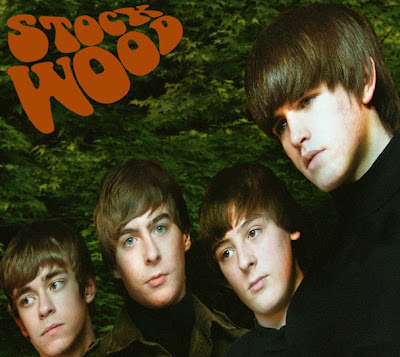 Shortly before Stockwood took the stage at Durty Nellie’s in Palatine this past Saturday night, an offstage announcer informed the crowd that the two-hour concert was going to be filmed. The teenaged Beatle tribute band’s following ranges from young girls to baby boomers, although a steady stream of 1960s hits played on the overhead sound system. Where else would a 13-year old lass hear Jimmy Gilmer & The Fireballs singing “Sugar Shack”? Durty Nellie’s, with its huge stage, curtains, and bank of colored lights, provided an impressive backdrop for the filming.

Stockwood, with Collin Berg as John, John Morefield as Paul, Nick Solideo as George, and Evan Berg as Ringo, opened with “I Saw Her Standing There.” They looked quite a bit older since I saw them win the Battle Of The Beatles Bands competition at Fest For Beatles Fans - Chicago some time ago. At Durty Nellie’s, their first set featured the boys decked out in black suits, white shirts, and skinny ties as they performed vintage Beatles songs. All four members have strong voices, and it’s easy to imagine that someone hearing them from another room would assume the band was comprised of grown men.

Billed as a 2012 Preview, the Durty Nellie’s show added a few welcome twists to the by now overly familiar template for Beatles tribute bands, which involves British accents; costumes; and dividing The Beatles’ timeline into three distinct chapters. When Stockwood came back for their second set, they passed on the Sgt. Pepper uniforms and simply swapped their dress shirts and ties for black turtlenecks. As they romped through mid-1960s fare like “Paperback Writer,” “Ticket To Ride,” and “Day Tripper,” I began hoping they’d stay in that era. Nothing against “Revolution” or “Get Back,” but at least a Beatles tribute band that specialized in the Revolver era would be a new approach.

Alas, after they finished the second set with a spirited “With A Little Help From My Friends,” Stockwood returned in the usual late Beatles period regalia, including long wigs and applied facial hair. Still, they breathed new life into the standard transition where ‘George’ does a solo bit, by having the full band erupt behind Solideo midway through, turning a delicate version of “While My Guitar Gently Weeps” into a barnburner. And it’s hard to fault Stockwood for wanting to flex their muscles. It was cute when they were little boys playing, “I Want To Hold Your Hand,” but now they want to take on tougher challenges like “Polythene Pam/She Came In Through The Bathroom Window,” “Don’t Let Me Down,” and “I’ve Got A Feeling.”

Between sets, I struck up a conversation with John Morefield’s grandfather, who was manning the t-shirt and souvenir table. He told me Stockwood was filming the show for an upcoming DVD, and added that a CD was also in the works. I should have asked if the wigs and beards were a new addition to the Stockwood repertoire. I can’t help thinking it would have looked silly when they were performing as little boys. Now in their mid to late teens, Stockwood have been around for eight years. Who knows, maybe they’ll set a record by playing Beatles music their entire lives. Worst things could happen.

If you enjoyed the Stockwood concert at Durty Nellie's, this is something you might want to watch http://www.youtube.com/watch?v=plFuGTyiU8k