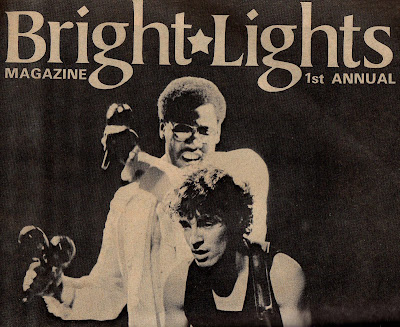 Photographer Paul Natkin has covered the rock scene for decades, taking countless iconic shots of the genre’s biggest stars. Back in 1977, he, along with fellow PhotoReserve founder Bill Sosin, collected some of their best B&W pics in a free publication called Bright*Lights Magazine 1st Annual. Other photographers, including Mitchell Canoff, M. G. Maples, Earl McGee, Vito Palmisano, Bill Richert, and D. Shigley, were also featured. The publication’s 17 x 11 format resulted in full and even half-page photos of Rick Nielson of Cheap Trick, Alice Cooper, B.B. King, Iggy Pop, and Rod Stewart that were suitable for framing.

The front cover, showing a guitar-slinging Bruce Springsteen dwarfed by Clarence Clemons, set the tone for the high caliber of the work featured within the magazine’s 32 pages. This image makes it easy to see why Natkin would first attract national attention via his shots of The Boss. Throughout Bright*Lights, Natkin, Sosin, and the other contributors captured the essence of charismatic artists such as Thin Lizzy, Emmylou Harris, Steve Goodman, Elvis Costello, The Ramones, Jimmy Page, Frank Zappa, and Ray Davies of The Kinks.

The pictures moved beyond the stages of rock and roll venues. Shigley showed Muddy Waters holding court with a group of friends in what looked like a basement, and depicted the authenticity of Chicago blues in a shot titled Maxwell Street Music. Albert King and Willie Dixon were also honored on this compelling two-page spread. The Media Page offered opinion pieces on the state of Chicago’s music scene penned by famous Chicago disc jockey Mitch Michaels; (then) WXRT Program Director John Platt; and noted journalist Cynthia Dagnal.

Glancing through the ads for Jam Productions; (then) WXRT Morning man Scott McConnell; The Chicago Chapter of NARAS; Sounds Good Record & Tape Supermarket; The Loop radio station; Triad Magazine; the BGinnings and Haymakers rock clubs; The Ivanhoe Theatre; and Wise Fools Pub, underscores the Chicago area’s rich cultural history. As far as I can tell, there were only two more issues of Bright*Lights; titled Chicago 78 and Summer 78.

Hi Terry, I just found your comprehensive reviews of Bright Lights and Stage Pass magazines. I will be posting some spreads from these two vintage pubs sometime soon on my personal FB page. I will continue to read your interesting blog. I'm happy to see our Chicago music history being so splendidly documented.