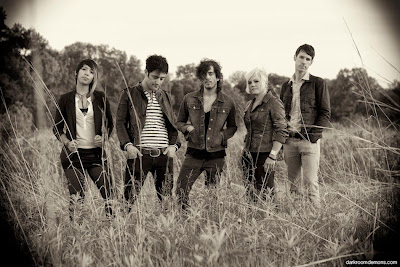 Stand-up comedian Len Austrevich’s Jokes4Miles campaign continues to pick up speed. In the past week, Austrevich has been on Channel Two News and WGN radio talking about his quest to get 5,000 people to send videotaped jokes to his son.

Miles Austrevich was diagnosed with brain cancer in 2008, and gets a huge emotional boost from watching funny messages sent his way from friends, strangers, and even a few musicians and actors. He’s received over 200 videotaped jokes since his Dad started the website this past January.

People interested in sending Miles a joke can drop by their local Leona’s restaurant tonight (Friday, February 3rd) or next Friday, between 5:00 and 11:00 PM. Jokes4Miles personnel will have cameras set up to record the jokes. Len and Miles are currently working on a documentary.

Synth rockers Dot Dot Dot are part of quadruple bill with AM Taxi, State and Madison, and The Scissors, at the House Of Blues tonight. The band talks about recording its next CD in the Studiophile column of the February Illinois Entertainer.

Squeegee, a power pop band fronted by vocalist Ellie Murphy, will be performing tomorrow night at the Tonic Room on Halsted in Chicago. Murphy tends toward hard rock in her singing, which adds an interesting edge to the ringing guitars and catchy melodies of songs like “So Far So Long Goodbye.” She’s a little lighter on “A Picture Of Today,” which shows a definite Badfinger influence. Squeegee has released a CD and is currently working on the follow-up.

I bought my ticket yesterday for the Haymakers Reunion coming up at Durty Nellie’s on February 26th. The event will feature a slide show, performances from bands who performed at the club back in the 1970s and 80s, and a lot of old friends reconnecting. Bitch, Dreamer, Hounds, Madfox, One Arm Bandit, Pezband Allstars, Jimmy Sohns (Shadows Of Knight) and Tantrum will be on hand. I bought my ticket from the friendly staff at Durty Nellie’s, but tickets can also be purchased online.